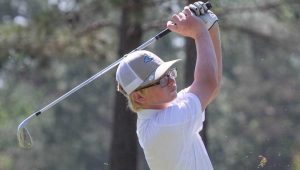 The Charles Henderson Trojan golf team wrapped up the regular season  at the Troy Country Club on Thursday morning.

The Trojans were one of four teams competing at the Country Club including, Northview, Kinston and Alabama Christian. Rehobeth also had a few individuals that competed.

The Trojans fired off a score of 364, good enough for second place behind Kinston who finished with a 319. ACA finished in third with a score of 372 and Northview finished in fourth at 386

“We played well,” said head coach Doug Branson. “This was our best score of the year, which is really nice to see at the end of the year. It means we are improving.”

The Trojans brought along four golfers in their host tournament. Griff McCrary was the low Trojan scorer on Thursday after posting a 78. Grant Baker followed up with a 90 and Cody Paramore shot a 94. Zack Jones shot a 102 and Bailey Nixon shot a 108.

“As a group we seemed to hit of the tee a little bit better today,” Branson said. “We are making better decisions with our short game. We are saving a few strokes around the green. Earlier in the season we cost ourselves a lot of strokes. We seem to get the ball closer to the hole and making a few puts.”

The Trojans will now take the next week off and prepare for the sectional tournament at the Azalea Golf Course in Mobile. Branson believes his team has improved since the start of the season and the hope is they will advance past sectionals and participate at sub-state, which will be hosted at the Troy Country Club.

“As any coach will tell you, if you’re improving throughout the season then you feel like your making strides,” Branson said. “Any coach will tell you it’s tough when you take a step forward and then two or three back. For us to be shooting lower scores at the end of the year is really nice.

“It would be really nice for us qualify and be able to come back to our home course and see where we can go from there.”