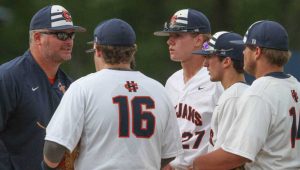 Photo/dan smith
Charles Henderson head coach Josey Shannon talks with his team during a game against Jemison last Friday afternoon. The Trojans will begin the playoffs Friday afternoon when they host Dallas County beginning at 4 p.m.

Eleven Charles Henderson baseball seniors, who have seen and shared in so much success over the years, will strap on the cleats for one final playoff run beginning Friday afternoon.

The Trojans will welcome in the Dallas County Hornets to Hogan’s Hole in the opening round of the Class 5A State Playoffs. Game one of the best two-out-of-three series is scheduled to begin at 4:30 with game two starting shortly after. If a game three is necessary, it will be played on Saturday at 1 p.m.

“I am excited,” said Trojans head coach Josey Shannon. “We feel like for the most part our guys are excited for the playoffs. They are ready to go.”

One of the top draws that lured Shannon to Charles Henderson from Stanhope Elmore in the offseason was the veteran leadership that the Trojans had to offer.

“When you take over a program with that many seniors, I knew going in the main battle would be to win their respect,” Shannon said. “On the flip side, they had to buy in on what I was selling. I feel it’s been great and it has been fun.”

The Trojans finished the season with a 16-11 record, but they have played perhaps their best baseball of the season down the stretch winning 10 out of their last 13 games. Shannon believes his team’s record doesn’t show the type of team he has.

“It’s kind of hard to say that we have had a bad season because our schedule has been so hard,” Kinsaul said. “A lot of people haven’t played the schedule that we have. I added it up the other day, it’s possible that we have played four state champions from four different classifications this season.”

From Jackson Murphy to Graham Wilkes, the Trojans have players that have been through the gauntlet before.

“That is definitely a confidence booster because they are accustomed to winning here,” Shannon said.

Like in any other playoff series, a team’s success usually lives and dies with it’s pitching staff Hunter Reeves, Charlie Tisdale, Wilkes and Grant Hughes make up a pitching staff that holds a combined ERA of 4.5.

“Pitching is the name of the game,” Shannon said. “When those guys pitch we seem to be looser. Pitching is consistent; every time you toe the rubber you should be able to throw strikes. When we put it all together and our top three are on the mound and we are swinging the sticks, we are tough to beat. We don’t have that one dominant pitcher that some schools have, but we do force contact.”

The Hornets enter the playoffs as the Area 7 runner up.

“I know a lot about Dallas County because I am from that area,” Shannon said. “I am not trying to overlook them, but we are trying to prepare for week two as well. We are looking to be in the second round. I like us against anybody. I have confidence in this team. If we come out and play our game, the sky is the limit.”