Riding high: Trojans excited for 2017 season after wrapping up their spring schedule 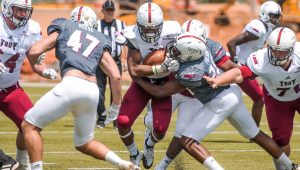 Photo/jonah enfinger
The Troy Trojans closed out their spring schedule with the T-Day Game on Saturday afternoon. After finishing last season 10-3 the Trojans are excited to begin the 2017 season.

The Troy Trojans closed out spring practice with the T-Day Game on Saturday afternoon at Veterans Memorial Stadium.

The scrimmage featured a gray and white squad that saw the white team win in overtime.

“The goal was to have the most fun spring game in the country,” said Trojans head coach Neal Brown. “We wanted to give an insight to our fan base and public. It’s all about competition; it’s all about energy.”

The Trojans spring schedule consisted of 15 practices and two scrimmages, all leading up to the T-Day game. The Trojans spent much of the spring without two of their biggest playmakers on the offensive side of the ball. Starting quarterback Brandon Silvers spent much of the spring with a cast on his throwing hand after injuring his hand in the offseason, while running back Jordan Chunn had limited contact. With that, Brown looked for other players to step up. Quarterbacks Sawyer Smith and Kaleb Barker took much of the reps under center.

“I really feel like Brandon is going to be one of the top quarterbacks in the country,” Brown said. “I am not one that says with an injury, some good can come out of it, but I think with him, it’s really going to pay dividends because he has been able to sit back and study the game more.

With Silvers out, Brown was able to see the future of the quarterback position.

“For our program we were able to look at Smith and Barker,” Brown said. “That is going to be the future of our program at that position. We had a head start in our 2018 quarterback race. I feel confident going into the fall that if Brandon were to miss time that either one of those guys could step in.”

With the spring schedule now in the books, Brown will take time to reset and figure out what his team needs to work on the most in advance of the season opener against Boise State on September 2.

“I like what we have. I think by far this is going to be our best offensive team, especially at the skilled positions. Defensively, we need to develop a pass rusher; that is going to be key.”

Brown feels like he has the athletes and the talent on the defensive line to make that happen in 2017. He believes he has one of the better interior defensive lines at their level.

“Jamal Stadom had a really good spring,” Brown said. “Trevon Sanders played a lot of football. We still have Seth Calloway who can move inside.”

One of the more intriguing position battles for the Trojans is at running back. Chunn has earned his spot as the top back, but behind him the Trojans have depth that includes Josh Anderson, Jamarius Henderson, BJ Smith and Jabir Frye.

“That is a room that has a lot of competition,” Brown said. “Jamarius is a guy that is going to be a factor for us in the fall. He can catch the ball out of the backfield. His running style is the complete opposite of Chunn’s and I think that is the thing I am most excited about.”

The Trojans will look to carry over their momentum from a season ago when they finished 10-3.

“I think we are coming out of the gates with a huge challenge,” Brown said. “It’s a measuring stick for us as a program. We have the opportunity to not only go out and play Boise first in 2017, but they come out here in 2018. That’s where we want to be, where Boise is now– one of the premier programs in the group of five. That is our vision for Troy football and for our program.”