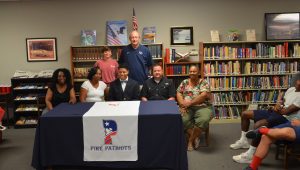 It was an anxious time for the future Warrior, but one that has long been anticipated.

“I feel like I am going to throw up honestly,” Orum said. “It’s a very surreal moment.”

The process to get to Monday was not always an easy one for Orum. He had to make a lot of tough decisions before finding his way to Babson Park, Florida.

“It means a lot, because I had a lot of tough decisions,” Orum said. “Webber was a fit and I had to stick with it.”

A big selling point for Orum was the fact that Webber expressed a desire for Orum to play during the 2017 season. There is also a possibility he may move to a more desirable position on the Warrior defense.

“(They promised) early playing time,” Orum said. “They were talking about moving me down to safety in the slot. I like that position a lot. That was what really hit it off.”

Orum was surrounded by many of his teammates along with his family for the scholarship signing. There was one man in attendance who made a special impact in the young defender’s life: head coach Gene Allen. 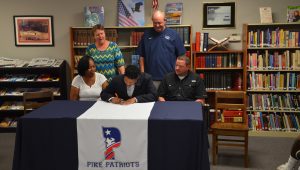 “Coach Allen is like a father figure to me,” Orum said. “Whenever I need anything I know he will be there for me. He is a good man.”

Sophomore year was a turning point for Orum as a Patriot. As an undersized defender, he didn’t see much of the field. It wasn’t until he started to grow into his body that he started to make an impact.

Orum will be the second football player from Pike to sign a scholarship during the school year. Brayden Herrera signed on to play at Faulkner University. The two teams are scheduled to play one another in Montgomery on September 30.

“We both play defense, but I hope he plays offense a little bit so I can light him up,” Orum said. “We are going to take care of him.”