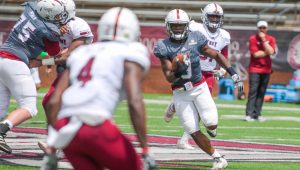 The Troy Trojans held T-Day at Veterans Memorial Stadium on Saturday afternoon. The scrimmage closed out the spring schedule for the Trojans. The teams was split into two different squads, Gray and White, with the white team coming away with a win in overtime that consisted of different on-field challenges. Unofficially, quarterback Sawyer Smith finished 9-for-15 for 86 yards, while Kaleb Barker went 5-for-8 for 38 yards and a touchdown.

Jamarcus Henderson led the way on the ground, rushing for 84 yards on eight attempts. Damion Willis finished with four receptions for 86 yards. There were four touchdowns scored by four different players on Saturday. Keith Johnson scored on a nine-yard rush, Barker scored on a 13-yard rush, Smith scored on a four-yard rush and Hunter Reese scored on a fumble recovery.

The Trojans kick off the regular season on September 2 when they travel to take on Boise State. They will have their home opener on the following Saturday against Alabama State.