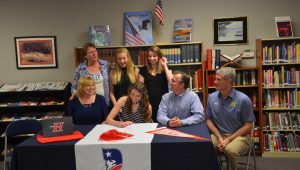 Lauren Johnson became the latest Pike Patriots to sign an athletic scholarship when she signed on Thursday to play basketball at Huntingdon College in Montgomery.

“It has been my dream to play college basketball,” Johnson said. “I am very excited; it’s going to be great.”

“I am so happy for her,” said Patriots head coach Robert Hawkins. “She has been working really hard since the eighth grade. She has progressed every year and I still think she has a lot of upside. I look forward to watching her play since she is so close.”

Johnson had a career that featured over 1,000 points for the Patriots. As a senior, Johnson averaged a double-double with 20 points per game along with 10 rebounds.

She earned second-team all-state for her performance on the court.

Johnson has been playing for as long as she can remember. She spent hours playing in the drive way with her two sisters and father dreaming of a day like Thursday.

“It definitely helped me a lot,” Johnson said. “It was nice that I was able to share this with my family and that we were able to do this as a family. My older sister played one year in college and she still comes back to play.”

Both of her sisters along with her parents were in attendance to see her put pen to paper.

“It was really big,” Johnson said. “It was amazing and I am really glad they got to come.”

Johnson made a lot of memories while playing for the Patriots. At the top of the list was being able to play with her best friends.

“There are so many memories,” Johnson said. “It’s hard to pick just one. There are good ones and bad ones, but they both have helped shape me into the basketball player that I am now.”

Johnson has always taken pride in being a leader both on and off the court. She has been a real team member. She was looked at as one of the key scorers on the team. She is also the leader, which she admits is not always easy.

“This is like a conclusion,” Johnson said. “This tells them that they can do this. It doesn’t matter the sport; you can do it. I wanted to show them that.”

“Her character is beyond reproach,” Hawkins said. “It’s as good as it gets. Sometimes I have to stand up to her standards. She was a leader with rest of the team.”

Johnson is excited to be attending a school that offers both a great basketball program, but even more about their strong academics.

“I am really excited to go there because I love the campus and I like that it’s only an hour away,” Johnson said. “They have the degrees that I am looking at and I like the program. Their basketball is good. The coach has come to several of my games and he knows how I play and he expects me to play that way when I get there. I went to one of their games and I love how they play.”