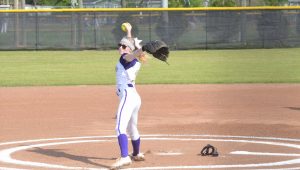 Messenger Photo/Mike Hensley
Hannah Calhoun delivers a pitch for Goshen on Thursday night. Calhoun and The Eagles fell to Kinston 13-5.

Warrick and Kelsey Gibson had back-to-back singles in the first inning and Goshen took an early 1-0 lead when Brooke Bennett singled in Warrick.

The Eagles added to their lead in the second inning. Warrick singled in Lexi McLendon and Avery Henderson scored on a groundout by Gibson to bring the score to 3-0 after two.

Not to be outdone, Calhoun was dealing over the first three innings. Calhoun allowed just one hit and had back-to-back 1-2-3 innings in both the first and third innings.

Kinston touched Calhoun for a pair of runs in the fourth inning. The first two batters singled and advanced into scoring position on a wild pitch. Both runners came around to score on a single to bring the score to 3-2.

The Trojans got both the runs back in the bottom of the fourth. Warrick doubled in Calhoun for the inning’s first run. Warrick came around to score on a dropped infield fly of the bat of Bennett to increase the Eagles lead to 5-2 heading into the fifth.

Kinston battled back and took their first lead of the game in the fifth inning when they scored four runs on three hits and two errors to bring the score to 6-5.

The Eagles had two batters reach in the bottom of the fifth inning, but they couldn’t push across a run.

Sydni Garrett came in in the sixth to relieve Calhoun. Kinston opened up a five-run inning when they tallied three singles to take an 11-5 lead into the bottom of the sixth.

Kinston scored their final runs in the seventh on a two-run homerun over the right field wall to give them a 13-5 lead.

The Eagles will be back in action today when they travel to take on Pleasant Home beginning at 3:30 p.m.