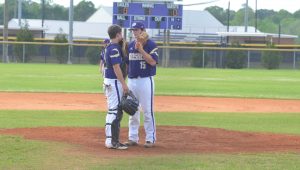 The Goshen Eagles struggled offensively and fell to the Cottonwood Bears 8-2 on Tuesday afternoon in Goshen.

Hunter Williams got the start for the Eagles in the loss. He pitched four innings and allowed seven runs. Brock Snyder followed and pitched three innings of scoreless baseball while striking out five.

The Eagles finished with eight hits in the loss. Dalton Bunce finished three hits to lead the eagles.

The Bears jumped on Williams early in the opening inning by scoring two runs on two singles and a hit batter.

The Eagles had an opportunity to get on the scoreboard in the bottom of the second when Williams and Taten Phillips reached. After being pinch ran for by Iyan Hinkle and Azavion Rogers, both runners advanced into scoring position, but were left there after Brock Snyder was thrown out at first on a bunt attempt.

After having a clean second inning, Williams allowed the Bears to load the bases and add to their lead, making it 3-0 on a single, a walk and an error.

The Eagles had two more runners in scoring position in the third inning and once again they couldn’t turn it into runs as Williams struck out, sending the game into the fourth with the bears still holding a 3-0 lead.

The Bears put the game out of the reach in the fourth after once again loading the bases. The Bears scored four runs on two hits, two walks and a catchers interference and the Bears took a 7-0 lead into the bottom of the fourth.

After adding a run in the fifth inning, the Eagles got on the board in the bottom of the seventh. Williams walked with the bases loaded to score Brian Redmon and Bunce singled in Jackson Kyzar to bring the score to 8-2.

The Eagles also hosted Georgiana on Tuesday evening. At time of press the Eagles were leading the Panthers 3-1 in the sixth innings.

The Eagles will be back in action on Friday when they travel to take on Highland Home.