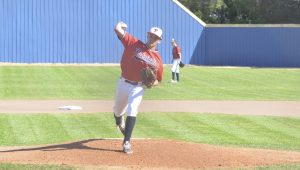 Photo/Mike hensley
Jade Sikes (above) and the Pike Patriots defeated the Northside Methodist Knights 5-1 on Monday afternoon to claim the area championship. Sikes pitched five innings to earn the win.

The Pike Patriots defeated the Northside Methodist Knights 5-1 to claim the area championship on Monday afternoon.

The Patriots improved their record on the season to 22-6 with the win.

“It was great,” said Patriots head coach Allen Ponder. “That was a goal that we had for this year. We did a good job at taking advantage of some things today. Our kids have done a good job at fighting through adversity all year long and I am very proud of them. It’s nice to be area champs, but that is just one stepping stone.”

Jade Sikes started for the Patriots and pitched five innings, allowing just the one run before Hunter Jones pitched the final two.

The Knights looked to jump on the Patriots early in the first inning. The first two batters reached on infield singles. Sikes  settled down thanks to the defense behind the plate by McWhorter, who threw behind the runner at second for the first out. Sikes forced a fly out and picked up a strikeout to get out of the inning unscathed.

Strong base running led to the first two runs for the Patriots in the bottom of the first. Jones and Hussey both singled and advanced into scoring position. Both runners came around to score on the same wild pitch to bring the score to 2-0.

“We have worked really hard during the last two practices on base running,” Ponder said. “That is an area we have really struggled with. I wanted to make that a point of emphasis and we did a good job at it.”

The Knights, cut the Patriots lead in half after McWhorter attempted to throw behind a runner at first following a strikeout. The Patriots didn’t have a player at first and the ball sailed all the way to the wall to right.

Another wild pitch set the Patriots up to score another run after Hollis singled in Barron to make it 3-1 after he advanced to second on a wild pitch.

The Patriots scored for the third consecutive inning when McWhorter singled in Reed Jinright and pinch runner Reece Burbage scored on a wild pitch to bring the score to 5-1 heading into the fourth.

Both pitchers clamped down over the final four innings and the Patriots were able to lock down the area championship.

The Patriots will be back in action today when they head to Eufaula to take on Lakeside in a double-header.

Earlier in the afternoon the junior varsity Eagles defeated the Knights 9-0.