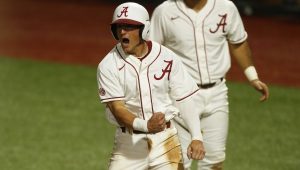 Photo/University of Alabama Athletics photography
Former Pike Patriot Chandler Avant has excelled as one of the top players of the Alabama Crimson Tide. He is currently hitting .325 despite coming off a season-ending ankle injury last season.

Former Pike Liberal Arts standout Chandler Avant, grew up in the shadows of Troy University’s Riddle-Pace Field dreaming of the day he would dawn a college baseball uniform.

On Tuesday evening, the junior made a trip back to Troy as a member of the Alabama Crimson Tide.

Avant has been a staple in the Tide’s lineup ever since he was a freshman when he started in 57 of the team’s 59 games. The experience has been a dream come true for Avant.

“It’s been awesome,” Avant said. “I have been getting to travel and see other stadiums. When I came here I didn’t really know anybody. My teammates have been like brothers to me and we are all really close. It makes it an even better experience.”

Avant was standout at Pike with the Patriots and went into Alabama ready to continue to turn some heads. As a freshman he batted .266 with 21 RBI and 31 runs scored and his numbers continue to grow since. So far this season, Avant entered the game at Troy as Alabama’s leading hitter at .325. Even with all the success, Avant still had to work.

“I have had to learn a lot,” Avant said. “The big thing was getting more reps and slowing the game down. The game is faster than it was in high school.”

“As a freshman I learned that if you want to be as good as you can be you have to spend most of your time doing that sort of stuff,” Avant said. “I love hitting and I love taking extra ground balls. That was never always big for me, I always had work ethic, but now all the extra work has paid off in the long run.”

That work ethic was put to the ultimate test last season when Avant suffered a season-ending ankle injury on April 23 against Texas A&M. At the time, Avant was leading his teams in runs scored (25) and doubles (15). It was a challenge at times, but Avant was able to bounce back this season.

“It was tough to start with,” Avant said. “When I found out I wasn’t going to be able to play, it was tough to swallow. I had great friends that helped me get through it. Our athletic trainer Joe Hoffer, is a tremendous guy. He did everything he could to get me back. Everything he did was great.

“Getting to play now after an injury makes you realize you can’t take any pitch, any day or any game for granted, because you never when your last game is going to be.”

Much of what Avant has accomplished can be traced back to his days as Patriot under legendary head coach Butch Austin.

“I had a wonderful coach in Butch Austin,” Avant said. “He is a great family friend. He taught me a lot about the game as far as how to go about the game, how to take things pitch by pitch and not letting anything get too big.”

Avant has had the opportunity to play in one of the top college baseball conferences in the country in the Southeastern Conference and play against elite competition.

“It’s been a great experience,” Avant said. “It’s awesome just being able to play in the SEC.  It’s the best conference in America.”

One of the memorable experiences that Avant has experienced in his career has been able to come back and play his hometown Trojans. Avant finished 2-4 with three RBIs in the loss to the Trojans. The biggest thrill came from playing in front of family and friends.

“It was awesome,” Avant said. “Coming back and seeing family, good friends that I have had throughout the years. I grew up in Troy so I knew that Troy had a really good team and I knew it was going to be a tough game for us.

“It was awesome they had a sellout crowd and it was a great environment to play in.”

One of the friends Avant had the opportunity to catch up with was Trojan catcher Chase Smartt. Although they went to different schools the two were great friends.

Avant has aspirations to play at the next level, to do that he believes …

“I defiantly want to play pro ball,” Avant said. “I need to keep working hard. In my opinion you can never work hard enough. Some days are tough, but you have to keep going at it. You can’t ever think you have done enough.”