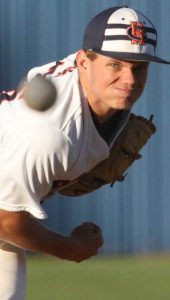 The Trojans, improving to 11-7 on the season, can clinch the Class 5A, Area 3 championship Saturday with a victory when the two teams meet at noon in Montgomery.

Brew Tech took an early 3-0 lead, but CHHS Head Coach Josey Shannon credited his seniors with providing leadership at a key time to change the momentum.

“I wasn’t going to lose my cool early because we made some errors and they scored three runs, but I was going to see how the leaders of the team were going to respond,” said Coach Shannon. “There was some uplifting moments in the dugout, so I felt like they took care of it without me having to say a word.

“Sometimes it just takes a minute or two to get your feet underneath you and start playing good ball. I think our team may have taken Brew Tech for granted and underestimated them a little bit, but once they hit us in the face they realized, they came here to play. I’m very pleased the way we came back and played our style of baseball.”

Brew Tech jumped to the 3-0 lead, aided by two CHHS errors, but the Trojans responded with four runs in the bottom of the first and three in the second for a quick 7-0 advantage.

Reeves singled in the first, Jabronski WIlliams and Jackson Murphy walked, and all three scored when Bryson Gandy cranked a double. In the second inning Reeves walked and Williams launched a home run over the right field wall. Gandy later singled and scored on a base hit by Carson Tucker for the 7-3 lead.

Graham Wilkes and Devan Suddith singled in the third, Noah Lowery walked, Grant Hughes singled, and Reeves and Williams put the ball in play to put the Trojans ahead 10-3.

Reeves did not allow the Rams to score in the top of the fifth, and CHHS won by the 10-run rule.

The Trojans were led at the plate by Reeves, Williams, Gandy and Suddith with two hits each, while Tucker, Wilkes and Hughes had one hit apiece.

CHHS has won 8 of its last 10 games, and if the Trojans win the first game they will clinch the Area title, and a second game will not be necessary.