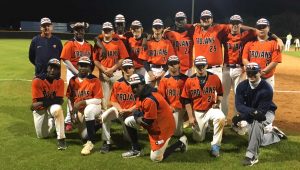 submitted Photo
The Charles Henderson junior varsity Trojans wrapped up their season on Thursday night with a double-header sweep of Headland.

The JV Trojans concluded their baseball season on Thursday night in a double-header against Headland.

Brock Huner got the start for the Trojans in game one and pitched all five innings, allowing one run on six hits and striking out six batters.

Five different Trojans picked up a hit in game one. Chance Pollard finished 2-3 with one run scored, while Lawson Scarbrough, Will Reeves, Anthony Gurba and Caden Bryan all had one hit.

The Trojans picked up both their runs in the first on a double by Scarbrough to score Pollard followed up by another double Reeves to score Scarbrough.

In game two Jackson Giles earned the win after throwing three innings and allowing one run on three hits and striking out one.

Pollard once again led the way when he finished 2-3, while Giles and Keonte Brantley each had a hit.

The Trojans scored their first run when Scarbrough reached on an error to score Pollard who reached on a single.

Gurba reached on walk in the second a came around to score on a sacrifice bunt by Huner to give the Trojans a 2-0 lead.

Headland cut the Trojans’ lead in a half with a run in the bottom of the second. The Trojans scored two more runs in the third after Brantley reached on a single and Scarbrough was hit by a pitch to put the game away.