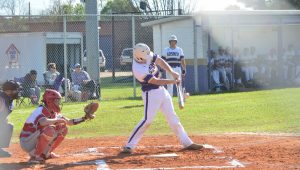 Photo/Mike Hensley
The Goshen Eagles dropped both games of an area double-header against rival Luverne on Thursday afternoon in Goshen. The Eagles lost game one 4-1 before falling 13-1 in game two.

The Luverne Tigers edged Goshen 4-3 in a pitchers duel during game one of a key area double-header on Thursday.

Landon Wilks got the start for the Eagles and pitched 6.2 innings, surrendering four runs while striking out five batters.

The Eagles finished with five hits in the game, but only one came after the third inning. Dalton Bunce, Brian Redmon, Cory Peterson, Hunter Williams and Blake Childs all picked up one hit.

The Tigers were able to get a runner in scoring position in the first inning, but Wilks wiggled out of trouble with back-to-back strikeouts to get out of the inning.

The Eagle offense went to work as Hunter Williams led off the inning with a double. Iyan Hinkle came in as a courtesy runner and came around to score on a sacrifice fly by Blake Childs to give the Eagles a 1-0 lead.

Wilks walked two and hit a batter in the second, and the Tigers grabbed a 2-1 lead heading into the third.

For the second inning in a row, Hunter Williams came through with a big hit. With two outs in the inning he singled up the middle to score Redmon and Peterson to give the Eagles a 3-2 lead.

Two hits and a walk later, the Tigers took a 4-3 lead into the fourth.

Both pitchers pitched a scoreless ball game over the next four innings. The Eagles had an opportunity to even the score in the seventh when Childs had a one-out single. Hinkle came in to pinch run and stole second base. Evan Rose came out and grounded out to end the game.

The Eagles struggled in game two and once again fell to the Tigers 13-1 to end the double-header. The loss for the Eagles forces Goshen to have to travel in the first round of the playoffs and play either St Luke’s or JU Blacksher on April 21-22. The Eagles will be back in action again on  Monday when they host Hillcrest Evergreen beginning at 5 p.m.