Gaining stride: Trojans get back into area play on heels of winning seven of their last eight games 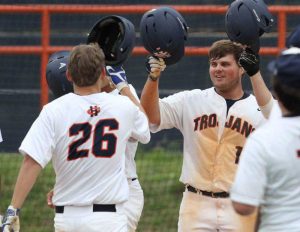 Photo/Dan smith
After struggling out of the gate, the Charles Henderson Trojans have won seven out of their last eight games to pull to 10-8 on the season. They will be back in action on Friday afternoon.

It’s been a tale of two seasons for first year Charles Henderson head coach Josey Shannon, but with the end of the regular season looming, the Trojans are playing their best ball of the season.

The Trojans (10-8) began the year with a gauntlet of schedule filled with teams from 6A and 7A.  A busy schedule and tough opponents led the way to a slow 3-7 start for Shannon and the Trojans.

The first hurdle the Trojans had to take on was to learn their new head coach.

“Being my first year here there was a lot of trust that needed to be built,” Shannon said. “It took our kids a little bit of time to figure out what it was that I wanted and play with a sense of urgency. That takes time.”

Once the learned Shannon’s philosophy, teams like Oak Mountain and Florence waited form them on the schedule.

“We started a little slower then we would have liked, but we played some really good teams,” Shannon said. “We played a lot of games in a few days which limited our pitching…we are driving all the way to Florence played and turn around and came back. We played five games in two days in the Sikes Tournament. That is hard on our pitching.”

With time and perhaps an easier schedule, the Trojans have been playing their best baseball of the season. They have won four out of their last five games and seven out of their last eight including a 3-1 record in the Fort Payne Spring Break Tournament.

The Trojans defeated Ashville, Guntersville and Cherokee County before falling Piedmont in their final game.

“We are starting to get into a more level playing field,” Shannon said. “We are putting our kids into a better situation…We are starting to space are games out and we are able to put our one two and three pitchers out there more often. That has been the biggest key.”

More rest between starts has led to more production from the rotation.

“Those have been our three horses that have been pulling our wagon,” Shannon said. “They understand who they are, Graham Wilkes threw a complete game the other day, he knows he hast to pitch to contact. They all know they have to hit the spots and let the defense play behind them. We are not a strike out club with big arms.”

On the offensive side the Trojans are beginning to get good production up and down the lineup after beginning the year with the bottom of the order routinely struggling.

“We have been getting a lot of help from the bottom of order lately,” Shannon said. “The bottom of the lineup hasn’t been the traditional three up and three down (situation) like it was at the beginning of the year.”

The Trojans return to area play on Friday at 4:30 before getting back into area play Saturday at home against Brew Tech.