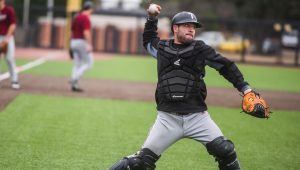 Photo/jonah enfinger
The Troy Trojans host in-state rival Alabama in a home-and-home series beginning this evening at Riddle-Pace Field. First pitch is scheduled for 6 p.m. The Trojans and Crimson Tide will play in Tuscaloosa Wednesday beginning at 6 p.m.

Troy and Alabama will continue their series in Tuscaloosa on Wednesday night.

The Trojans (14-12, 4-5) return home for the first time since losing two out of three games against Louisiana Lafayette last weekend.

“It’s a fun night of baseball,” said Troy coach Mark Smartt. “Everybody gets excited about it. It should be a great crowd and it will give our kids a chance to play in front of a big crowd.”

Even with all the excitement, coach Smartt knows this evening’s game against the Tide all comes down to playing baseball.

“I understand how significant the opportunity is to play Alabama,” Smartt said. “It is the most important game of the season for me because it’s our next game. That is how we build our program. The fact that it’s an SEC school certainly adds value to the competition for our team. I know our kids are excited for the challenge.”

The Trojans have dropped five out of their last seven contests including two out of three this weekend in Arlington against the Mavericks. Smartt hopes their come-from-behind win on Saturday will be the spark they have been looking for.

“I really hope the Saturday late win gives our team a chance to build some momentum,” Smartt said. “That was really a much needed win for our team. I hope it gives our team a positive lift coming into the mid-week games.”

Alabama (13-15, 2-7) comes into Troy searching for a win. They are coming off an 8-5 loss to Arkansas on Sunday and have lost five out of their last six games.

The Trojans will look to beat Alabama for the first time since 2013 when the Trojans defeated the Crimson Tide in the regionals twice before falling to Florida State.

The Trojans have defeated the Tide at home in three out of the last four games.

Troy native and former Pike Lib Patriot Chandler Avant will make a trip back to Troy as a member of the Tide. Last year Avant missed much of the season with an injury. This season Avant is hitting .319 with six runs batted in. Avant had a season high four hits against Arkansas and scored a season high three runs in a game against Southern Mississippi. In the field, Avant has seven errors in 95 attempts, good enough for a fielding percentage of .952.

Corey Childress will get the honor as Troy’s starting pitcher in game one of the series. After getting the opening day nod this season, Childress is 2-2 with a 5.75 ERA

“His last two outings have been terrific,” Smartt said. “He went to the bullpen after some early season struggles. He has thrown very well of late. We are trying to find the right starting pitching rotations. Corey is a guy after the bullpen stints that has become more consistent.”

Another Troy native in Austin Mabray will get the nod as the Trojan-starting pitcher on Tuesday night. Mabray is currently 1-1 on the season with a 4.70 ERA.

Alabama will counter with Decan Meadows on Tuesday evening. They have yet to determine a starter for Wednesday.

Both games will begin at 6 p.m.