After losing his mother in early September, King had to try and focus for the upcoming basketball season.

By season’s end, King had helped lead the Wildcats to its first ever Georgia Class 6A final four appearance after winning a program-best 26 games.

“The season was great,” King said. “We always talk about going through the process. We were a very young team. We put in the work and the daily grind in order to be great.”

King had to go up against circumstances that many coaches don’t go through so close to the beginning of a season. After losing his mother on September 7, King had to quickly prepare for the upcoming season. To do so he leaned on some words from his mother.

“The one thing my mom always taught me, after all she went through, was keep moving on and live your life,” King said. “I know the one thing she would want me to do is live my life to the best of my ability. She is OK and in a better place.”

Like Henderson, King was an educator and his main focus was making a change in people’s lives. It was that passion that drove him to become a basketball coach. 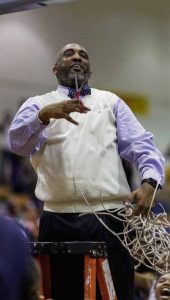 “I knew back in Troy that I wanted to be a basketball coach,” King said. “I did the engineer thing, but I think I knew I wanted to be a coach growing up in Troy. I have fallen in love with it and I have had a lot of success up here.”

A lot of success came this season for coach King. As well as earning a berth in the final four, King was also named coach of the year by three different publications, including the Atlanta Journal Constitution.

“My mom pushed me to do whatever I wanted to do and she gave me the courage and the strength to do those things,” King said.

The Wildcats had a successful season and with a young team coming back next year, things look to be on the rise for King and the girls of Lovejoy;, but the 2016-2017 season will always be one to remember for their head coach.

“The biggest thing is we have kids are that are going to school,” King said. “I have four seniors and all four will be going to college. To see them go off and be productive members of society is probably the most rewarding thing.