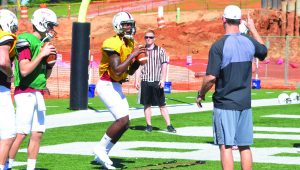 The Troy Trojans hosted their first official scrimmage of the spring on Friday afternoon at Veterans Memorial Stadium. The Trojans celebrated Student Appreciation Night at the stadium. Students received free pizza and had the opportunity to run the 40-yard dash.

The Troy Trojans held their first official scrimmage of the spring as part of Student Appreciation Night on Friday.

“It was a great afternoon,” said Troy head coach Neal Brown. “We had 300 plus students. One of the best things about Troy University is our student involvement, and our guys did a great job at getting them out there.”

Along with being able to watch the scrimmage, students were given free pizza and the opportunity to participate in a raffle as well as run the 40-yard dash, kick field goals and more. 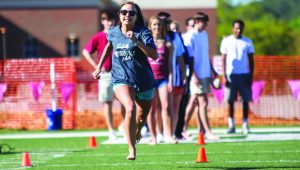 “A couple of those guys that ran during the 40 may run better than some of our receivers,” Brown said. “I think we had some track people sneak out here.”

Some of the prizes that were up for grabs were game-worn jerseys signed by Brown, free burgers from Hardees for a year and free oil changes from Troy Nissan.

“They (students) have done a tremendous job since I came back to coach and I am really appreciative of them,” Brown said. “I feel like we will break the attendance record again and I believe we will have our first sellout in stadium history when we open up our home schedule against Alabama State.”

On the field the Trojans had an up and down day that featured a lot of younger players playing big roles. Quarterback Brandon Silvers was still nursing his injured hand and many of the starters on defense were also on the sideline.

“There was a lot of good moments,” Brown said. “Offensively we bounced back from a bad Wednesday. We held some players on both sides.”

The running backs, led by B.J. Smith and Jamarius Henderson, were trying to find their place in a crowded back field.

“I think we have four quality players,” Brown said. “We have one guy that has proven himself. Jordan Chunn is the only proven commodity that we have until Jamarius, BJ and Josh (Anderson) consistently come out on Saturday afternoons and perform. I think we have the potential to have a really deep running group.”

With that being said, both running backs’ talents stand out to their head coach.

“Jamarius is explosive, probably the most explosive player on our whole football team as far as his ability to burst and strength at the point of contact,” Brown said. “BJ is just versatile. He has great patience, the most patient running back we have in our stable.”

The Trojans will take part in their second scrimmage at noon on April 8 and then play the T-Day Scrimmage on April 15.