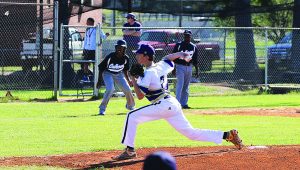 Photo/april Brown
Brock Snyder delivers a pitch for Goshen on Friday afternoon against Calhoun. The Eagles defeated Calhoun 23-5 in game one of a scheduled doubleheader.

The Goshen Eagles began area play with a bang on Friday night when they beat Calhoun in a doubleheader by a combined score of 33-5.

The Eagles dominated game one, defeating Calhoun 23-5 before following that up in game two with a 10-0 win on a combined perfect game by pitchers Landon Wilkes and Blake Childs.

“It didn’t start off too good,” said Eagles head coach Robby Kinsaul. “They scored their five runs (in game one) off walks. We walked in five runs. We swung at good pitches at the plate and got some hits and walks. We got base runners.”

Brock Snyder pitched for the Eagles in game one and picked up the win. The Eagles scored 10 runs in the opening inning with all but one player touching home plate. Seven more runs came across home plate in the second inning on four hits by Jackson Kyzar, Hunter Williams, Tatum Phillips and Mitchell Rushing.

“It was weird,” Kinsaul said. “I started Landon in game one and he couldn’t find the strike zone. He went over and worked on something in the bullpen and came back in the next game and he was sure throwing it.”

The two wins give the Eagles a 2-0 start in area play.

“It’s big when you take care of business in the first series,” Kinsaul said. “It kind of takes pressure off because we know what is at stake next week.”

The Eagles will travel to take on Houston Academy beginning at 4 p.m. Monday.