Enshrined: Grant gets inducted into AHSAA Hall of Fame 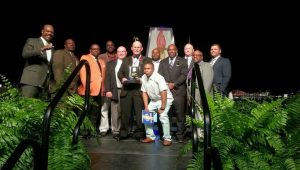 submitted Photo
Former Pike County football coach Wayne Grant and many of his former players were on hand to celebrate Grant going into the AHSAA Hall of Fame.

“As far as sports goes it is one of the most important thing that can happen to a coach,” Grant said. “You spend a whole career trying to achieve things and accomplish things and all of a sudden your career is over. To know you are the one of the few that accomplished things that I have makes you feel good.”

Grant was one of 12 inductees this year and he is just the seventh all time coach to get the nod.

“All the effort that you put into it, you sometimes you feel uncompensated for it,” Grant said. “When you get inducted it makes you feel worth while.”

Grant served as head coach of the Bulldogs twice. In his first stop from 1980-1991, Grant led the Bulldogs to their first two state championships in 1988 and 1989.

Following the 1991 season Grant left to coach at Talladega where he led the team to their first four playoff appearances.

Grant returned to Pike County in 1999 and stayed until 2007, once again building the program from the bottom up. He led the Bulldogs to two more state titles and compiled an overall record of 197-52 at Pike County.

Even with the record and the state titles on his resume, Grant felt humbled and excited to be around his fellow inductees.

“There are so many people that deserves it,” Grant said. “When you get chosen as one of the 12 it feels really good to know that you are in the presence of all those great coaches and (are humbled by) the contributions that they have made to the sport. To know that you are one of those guys makes you feel really good.”

Each inductee was interviewed prior to the ceremony, and those interviews were played during the event. “It was very neat being there in that situation listening to what the other coaches had to say,” Grant said. “It was interesting that pretty much all the coaches had the same things to say.”

Apart from his performance on the field, Grant is also remembered as a coach who helped shape many successful players and men throughout his career. Grant coached two Mr. Football winners – Chris Nickson and Steve Coleman – and two players who went to play in the NFL: Fred Baxter and Cornelius Griffin.

The players that Grant impacted the most made sure to make the trip to see their favorite coach honored.

“It was really good for them to remember what they went through,” Grant said. “My style of coaching was tough on the players; It was very demanding. There was a lot of material you had to learn to play in my system. It was really nice to know that the guys learned from that and came back and to say ‘thank you; we appreciate what you have done for us.’”