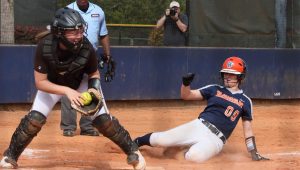 Submitted Photo
The Charles Henderson Trojans finished play in the Gulf Shores Softball Tournament on Wednesday with a 4-2 record.

The Trojans compiled a 4-2 record in the tournament playing teams from across the country, including a team from Chicago.

“We were very proud of the girls and how they played,” said Trojans head coach Robin Snyder. “Anytime you can go to a tournament of that magnitude and that competition and be 4-2, you are definitely proud of what you accomplished.

“We definitely have some things that we still need to work on, but that’s what the season is for.”

The Trojans took part in a pool-style format over the first four days of the tournament. The Trojans finished that portion with a 3-1 record with their lone loss coming against tournament host Gulf Shores 8-4.

In all, the Trojans played two teams from the state of Illinois in the tournament and gave Snyder the ability to gauge his team against teams with a lot of talent.

The Trojans faced their share of adversity during the tournament. They trailed at least once in four of the six games they played.

“I was proud of how they competed,” Snyder said. “There were some games where we battled back and fell behind again and had to battle back. They never gave up in any game.”

The Trojans also learned how to play in close games throughout the tournament. Four of the six games played were decided by two runs or less, including two games being decided in walk-off fashion.

“Hopefully that will better prepare us for when we have the opportunity to play at state,” Snyder said. “Maybe we can be a little more comfortable in those situations and learn from the success and from the ones where we weren’t successful.”

The Trojans had two pitchers log innings throughout the tournament in Emma Kirkpatrick and Molly-Kate Sanders. The two pitchers allowed a total of 10 earned runs over the six games.

“The pitchers pitched really well,” Snyder said. “Stamina throughout a tournament like this plays a part. It’s not as hot as it’s going to be when state comes around. They were able to work on their stamina and see what they need to work on. Overall, they pitched really well. They pitched every game well enough to where we were able to compete and that is all you can ask from them.”

On the offensive side the Trojans averaged nearly six runs per game in Gulf Shores.

“Offensively we did really good,” Snyder said. “We had one game where we weren’t very productive. We still won the game; sometimes you have to win games like that. In the last game we had runners in scoring position a lot and we weren’t successful at getting them in. Those are the things we have to be successful in.”

The Trojans will be back in action on Tuesday when they host Brew Tech beginning at 5 p.m.