Full of aces: Pitching staff leading the way for Patriots 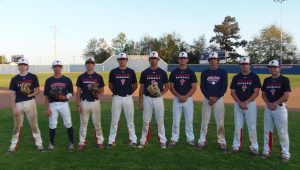 The Pike Patriots rolled into spring break with a 19-4 record, just six games shy of their win total for all of last season. Although the offense has gotten it done for the Patriots over the first half of the season, it’s the pitching staff that is leading the way.

Last season, the Patriots had two pitchers that head coach Allen Ponder could count on. This season they have five pitchers that, so far, have a strong track record.

“I think the pitching staff is always going to be the key,” Ponder said. “It begins with the pitcher and it ends with the pitcher. You need your pitchers to compete, to be able to throw strikes and I think we have done a good job in those areas.”

Burbage leads the Patriots in innings pitched with 35. He has allowed just four earned runs, good enough for a sub 1.00 ERA while striking out 50 batters. Jinright has allowed 11 earned runs over 26 innings of work for a 2.88 ERA. Though Carter has only thrown 17 innings this season, he has yet to allow an earned run. Jade Sikes has an ERA of 1.15 while Barron sits at 1.61. The Patriots have also received innings from Wood Jinright, Tylyer Floyd, Hunter Jones and Cason Murphree. As a staff, the Patriots have allowed just 34 earned runs on the season.

“Between those guys, they have all done a very good job this year,” Ponder said. “I believe the most important thing when it comes to a staff is having a competitive spirit every single time they compete. As a staff, we have gone out there and not have our best stuff, but they go out there and compete.”

Coach Ponder a former pitcher at the University of Alabama has a passion when it comes to the art of pitching. One day early in the season during practice Ponder expressed his interests to his pitchers.

“I love the pitching position,” Ponder said. “We preach all the time about handling situations when things don’t go well and not let one mistake lead to another. We struggled in those areas and ever since we had that talk and had some good bull pen sessions, we haven’t had that problem.”

Last season, Ponder and the Patriots had two arms they could look to. This season depth has been made the biggest impact for Pike.

“This season we have good arms and we have a lot of arms,” Ponder said. “We don’t have two guys feel like they have to step up and throw no-hitters. We have other guys that can step up. I believe having a deeper staff has taken some pressure off.

The Patriots still have important area games ahead of them against Lakeside. Ponder believes in the postseason having the depth would give his squad the advantage.

“It’s huge,” Ponder said. “Looking forward to the playoffs, it’s a best two out of three series. When you get to the playoffs and you only have two good arms, it’s hard to win a series. Depth becomes such a huge issue at the end of the season.”

The Patriots will be back on the field on Friday evening when they travel to take on Bessemer in a double-header beginning at 2 p.m.