Back in action: Trojans continue tournament with win over Haleyville 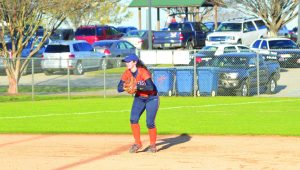 The Trojans defeated the Haleyville Lions 4-3 to begin their day before closing out day two against the host Gulf Shores.

The Trojans managed just one hit in game one against Haleyville Tuesday but were able to score seven runs to get the win.

Emma Kirkpatrick got the lone hit in the game with an RBI triple. Kirkpatrick also contributed on the mound throwing all five innings, striking out three batters and allowing three earned runs on seven hits.

The Lions brought their deficit down to one when they scored a run in the second inning on three hits and a walk.

In the bottom of the third, the Trojan offense went back to work. They scored two runs on Kirkpatrick’s triple to score Lowery and another fielder’s choice by Sidney Armstrong to score Grayson Adams.

The Lions entered the final inning down three at 4-1. They scored two runs on two hits and one error, but left the tying run on third base.

Molly Kate Sanders took the ball in game two for the Trojans on Tuesday evening. She got into a little bit of trouble early by surrendering four runs in the top of the first inning.

The Dolphins had four hits in the inning including a double.

The Trojans battled back in the bottom half of the first to tie the game at four. Lindsey Fox hit a bases-loaded single to score Lowery and Armstrong to bring the score to 4-4. Gracie Williams followed up with a sacrifice fly to score Fox. Sanders drove in the tying run with a single scoring Earls.

The Dolphins took the lead with a run in the third inning. They added three more runs in the fourth and held on to beat the Trojans 8-4. After day two of the tournament the Trojans are 3-1.

Crook wins player of the week