Area play: Eagles confident as they head into area play 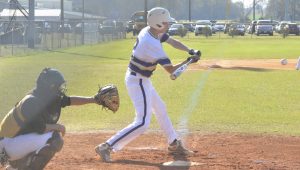 Photo/Mike Hensley
The Goshen Eagles have begun the season with a 8-4 record. On Friday afternoon the Eagles kick off the area portion of their schedule when they host Calhoun.

The Goshen Eagles hope to carry over early success into the start of area play this Friday afternoon.

The Eagles (8-4) got off to a slow start in 2017, but as they get set to begin area play, the Eagles have been playing their best ball of the season.

“We got out the gates a little slow,” said Eagles head coach Robby Kinsaul. “We kind of got back to the mentality of taking one game at a time. Ever since then, our overall performance has been better and it has turned around our season.”

The Eagles have played teams such as Highland Home, Red Level and Elba. Those games are important too, but the ones that really matter begin this Friday afternoon when the Eagles play Calhoun in a double-header.

The Eagles’ turnaround this season has been the result of the improvement of the pitching staff. Led by Landon Wilks, the Eagles pitchers have taken a step in the right direction. They have been able to pitch deeper into games due to a lower pitch count, something that Kinsaul has stressed since the beginning of the season.

“Over the last couple of starts we have been trying to stretch them out,” Kinsaul said. “It (good pitching) could take you all the way. I believe that good pitching shuts down good hitting any day. We have three or four guys that have started ball games for us and then we have guys that have come off the bench. I believe the games that we have played have prepared us.”

On the other side, the hitting has continued to heat up this season. The top of the order that includes Cory Peterson, Brian Redmon and Jackson Kyzar has led the way for the Eagles all season long.

“We have had game’s where we have struggled one through nine in our lineup,” Kinsaul said. “Here recently, one through nine has gotten on base. We emphasize getting on base. It doesn’t matter if it’s a hit or a walk– we need runners.”

One area of their game coach Kinsaul would like to see cleaned up is their base running.

“That is one that we will start working on today (Monday),” Kinsaul said. “We need to do a way better job at that.”

The Eagles will play Samson on the road this afternoon, before hosting Calhoun on Friday afternoon in a double header.

“We are excited for the opportunity,” Kinsaul said. “We know what is at stake for us starting Friday.”

Game one on Friday is scheduled for 4 p.m.