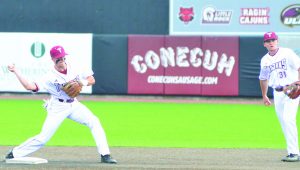 Photo/Mike hensley
The Troy Trojans led for much of the game on Friday night, but surrendered the lead late in a 6-5 loss to the 15 ranked Louisiana Lafeyette on Friday night.

The Trojans surrendered the go-ahead run in the ninth inning and lost a hard-fought battle 6-5 to Louisiana Lafayette on Friday.

“(It was a) tough way to lose,” said Trojans head coach Mark Smartt. “We had it set up. We had the right guys in the right spot. I trust Marc Skinner to win the game for us, and he didn’t execute like he needed to.”

Cajun starting pitcher Gunner Leger entered the game having allowed just three runs in 31 innings. On Friday the Trojans made him work, and he pitched only five innings. The Trojans scored five runs; two of them were earned on nine hits.

Matt Sanders, Brandon Lockridge, Trevor Davis and Joey Denison each had two hits, and the Trojans had 11 total.

“I am proud of my team,” Smartt said. “We were down 4-0 against the best pitcher in the league. We rally right away and get four in one inning and one in the next to take the lead.”

Darren Osby got the start for the Trojans. The junior right-hander threw 5 and a third innings and 104 pitches. He surrendered four runs on 13 hits. Lance Johnson pitched the next two and two thirds innings without no runs and one hit.

“I thought Darren Osby showed some toughness,” Smartt said. “He faced early adversity and settled in. I thought Lance Johnson showed who he was tonight; he is a tough kid.”

Skinner pitched the remaining 1.1 innings. He allowed one run on three hits.

The Trojans a chance to break through in the second inning when Chase Smartt reached first on a walk and Mason Rogers singled. Denison followed with a single to right field. Smartt raced around third base and was thrown out at home despite trying to leap over the catcher.

The Cajuns had a similar situation in the third, but took advantage of the opportunity. Ishmael Edwards led off the inning with a double and came around to score on a single by Alex Pinero. Kennon Fontenot stretched the lead to 3-0 with a two-run double to right center. They added one more run on a single and took a 4-0 lead into the bottom of the third.

The Trojans tacked on four runs in the third to even the score. Lockridge singled in Steven Whitaker. Sanders scored the first unearned run of the inning when he scored on a wild pitch. Denison hit a ringing single to score both Davis and Lockridge.

The Trojans had three hits and took a one-run lead at 5-4 in the bottom of the fourth when Davis singled to left field to score Drew Frederic.

Osby was pulled for the Trojans with one out in the sixth inning with two Cajun runners on base. Johnson came in and snuffed out the rally.

The Trojans and Cajuns will return to Riddle-Pace Field today at noon.