Davenport named finalist for player of the year 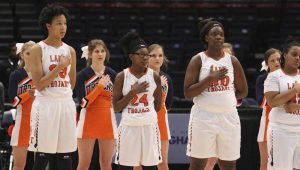 Messenger Photo/Dan smith
Davenport (left) averaged 15 points per game in 2017 and is a finalist for the Player of the Year Award.

Charles Henderson sophomore Maori Davenport is a finalist for the Class 5A Player of the Year Award from the Alabama Sports Writers Association.

Davenport helped lead the Trojans to their third trip to Birmingham’s Class 5A State Championship in four years, where they advanced to their first ever finals.

Davenport really turned some heads with her performance in Birmingham in the state championships. During the semifinal win over Arab, Davenport contributed by scoring 23 points by hitting on 10 of her 15 shots. She also had 13 rebounds and six blocked shots.

In the finals against Wenonah, —— Davenport recorded a triple-double. Davenport scored 20 points with 25 rebounds and a state record 19 blocked shots.

Davenport is one of three finalists. The others two are Bianca Jackson of Brewbaker Tech and Unique Thompson of Faith Academy in Mobile t.

The winner of the Class 5A Player of the Year Award will be announced on Tuesday, April 4.