Hartley honored to win Player of the Week award 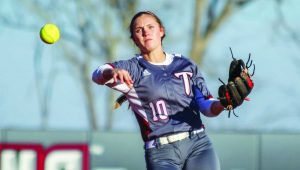 For the first time in her career, Troy’s Becca Hartley is the Sun Belt Conference Player of the Week.

“I told somebody the day before that if Stephanie (Snyder) didn’t get it I would be mad,” Hartley said. “It is really neat, just being able to represent this university. But I wouldn’t be here without my coaches and I am just really thankful.”

Hartley batted .615 at the plate (8-13) with three homeruns, five RBIs and five runs scored last week. And the response has been “overwhelming” from her hometown supporters.

“It’s been overwhelming,” Hartley said. “I knew they kept up with me, but it just shows how much they really care. They have invested in me and they are watching it grow. I have been able to share this with them, and it’s been really neat.”

Hartley’s homeruns came during the three-game series against Georgia State in the conference home opener. Hartley hit a homerun in each of the three games against the Panthers including a leadoff homerun in game three.

“I would say I was definitely seeing it, the ball was pretty big,” Hartley said. “I feel like I have been comfortable all year. I have been hitting a lot of balls at people and this weekend they fell, which is exciting.”

Hartley is already up to 10 home runs on the season leaving her one behind her career high of 11. Hartley has 33 career homeruns, putting her in fourth place in the Troy record books.

Hartley sits in eighth place nationally in homeruns, but the senior isn’t taking the time to check the box scores to see where she stands.

“We pride ourselves as program on things not being about the individuals,” Hartley said. “I try not to worry about that kind of stuff. I try to blow it off, but it gets difficult when it’s around a lot. Our goal is to make it to the post season, so however I can help get them there is what we are looking to do.”

Having a standout series against a conference opponent only sweetened the experience. “I personally never won a series against Georgia State,” Hartley said. “That was something that we wanted to have happen. They had a lot of success the weekend before. We knew we belong on the field with anyone that we play, and we weren’t going to let them think that they already had it in the bag. We try to compete every game it doesn’t matter who we are playing. Just getting the two wins against them, I think gives us confidence the rest of the season.”

Hartley knows it’s no time to be complacent.

“There is always room for improvement,” Hartley said. “I play a sport where if you fail 70 percent of the time you’re pretty successful. I just have to keep that in mind and try not to be perfect and just try to help the team. There are going to be times when the ball looks invisible, and there are times when it’s going to look huge. I just need to keep doing what I am doing.”

Hartley and the Trojans will be back in action on Saturday when they travel to take on Coastal Carolina beginning at noon on Saturday.