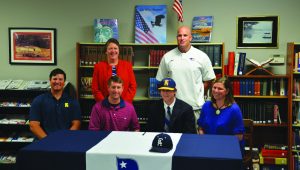 Photo/Mike Hensley
Hunter Jones has been a three-sport athlete during his time at Pike Liberal Arts. On Wedensday morning Jones signed a baseball scholarship with Central Alabama.

Hunter Jones was never the biggest athlete on the team; at times he may have been the smallest. But with perseverance and hard work he quickly became a leader, and on Wednesday Jones signed a baseball scholarship with Central Alabama Community College.

Surrounded by family, friends and coaches, the Pike Lib senior described the experience with one word.

“It’s very electric,” Jones said. “My dad, mom and family have always wanted me to sign and play college baseball. That has been my dream ever since I picked up a baseball. This means a lot to me.”

Jones got his start at Lakeside School in Eufaula playing with the varsity squad as a seventh-grader. Often overlooked by his teammates and the opposition, Jones soon changed minds.

“I finally got bigger,” Jones said. “I got older and I realized my potential was there to be a college baseball player.”

After coming to Pike, Jones took on the role of being a three-sport athlete. Jones is a sharp shooter from behind the three point line with the basketball team and he was relied on in key times as the kicker on the football team.

Jones used those skills and attributes to help him on the baseball field.

“In football and basketball you go through adversity and it makes you stronger,” Jones said. “In football you don’t give up and it’s the same in basketball. You keep fighting.”

Jones had many mentors, but head baseball and basketball coach Allen Ponder has shared the journey from Lakeside to Pike.

“This is a great day,” Ponder said. “This is obviously his day, but as a coach who has seen him from start to finish, I would consider this a big day for me also. I am very proud of this young man. He has come a long way from those days as a 14-year-old kid. I knew he was special when I first met him. He is a competitor.”

“Its very pretty,” Jones said. “They are really good at baseball and I feel like this is a good fit.”

Jones has aspirations to play baseball at the Division 1 level and hopes to use his time at Central Alabama to prepare for that.

And he has one high school goal remaining.

“No doubt, state champions,” Jones said. “I think we are the better team in 3A this year in private school ball. We have had a great season so far. We have a great team and we have really come together as a family.”