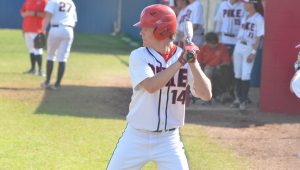 Messenger Photo/Mike Hensley
Reed Jinright (above) and the Pike Patriots took advantage of mistakes in their 11-0 win over Crenshaw Christian on Tuesday afternoon.

The Pike Patriots took advantage of Crenshaw County mistakes in an 11-0 win over the Cougars on Tuesday.

The Patriots were beneficiaries of three errors and seven walks on their way to their 16th win of the season.

“For us right now it’s all about playing good baseball,” said Patriots head coach Alan Ponder. “We came out a little slow, but after the first time through the lineup we started to find some barrels. In this situation, it’s good to come away with a win heading into Thursday.”

Patriot pitcher Clay Barron wriggled out of a bases loaded jam in the second and again stranded a runner in the third to help preserve the lead at 1-0.

The Patriots loaded the bases with three straight walks in the bottom of the third.  Reed Jinright scored when Hussey reached after being hit again by a pitch. Max Copeland brought in Wood Jinright on a sacrifice fly to make it 3-0.

“I couldn’t care less how we score the runs,” Ponder said. “Whether it’s with 10 hits or no hits as long as we are putting runs on the board that’s fine with me. We would like to see those runs come from hits, but in any game as long as you get runs on the board and win the game that’s all that matters.”

“After the first time through I thought we did a better job at letting the ball get deeper and finding some barrels,” Ponder said. “Good things happen when you do that.”

“Clay looked great,” Ponder said. “Clay has done a really good job for us this year. He is getting better and better filling up the zone and pitching to contact.”

The Patriots finished with eight hits led by Trevor Barron who finished with two hits. Murphree, Reed Jinright, Sikes, McWhorter, Max Copeland and Carter all picked up hits for the Patriots.

The Patriots will be back in action again on Thursday when they travel to Dothan to take on Northside Methodist in a double header beginning at 2:30 p.m.