Pitching leads the way for Patriots 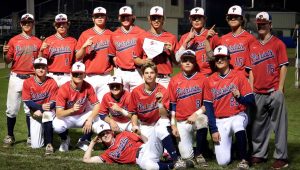 submitted photo
The Pike Patriots captured the championship of the Macon East tournament over the weekend.

The Pike Patriots baseball team defeated some of the top teams in the state this weekend en-route to being crowned champions of a tournament hosted by Macon-East Academy.

After winning the championship, the Patriots overall record improved to 15-4 on the year.

“We had a really good time this weekend,” said Patriots head coach Allen Ponder. “It’s always fun when you win, but at the same time Macon East always does a great job. We played some good baseball to wrap it up and it was a good weekend for us.”

The Patriots defeated the third-ranked Lowndes Academy, the seventh-ranked Marengo Academy and the fifth ranked Autauga Academy before facing off with Autauga for the second time in two days in the championship round.

“That is always going to give us momentum,” Ponder said. “You always want to play well when you play good competition like that and come away with some victories. For us, it’s big; especially going into the meat of our area schedule.”

The Patriots’ success was largely due to the success of their pitching staff over the weekend. The Patriots had four pitchers have complete game efforts over the weekend, starting with Tristan Carter who threw a no-hitter in Friday’s win over Lowndes.

“Anytime you are playing in a tournament where you know you’re going to play four or five games you need to get a lot of innings out of your pitchers and keep the pitch count low,” Ponder said. “We have been looking for more consistency out of our arms and this weekend was great.

“Tristan looked great. Tristan gets better every time he gets out on the mound. That was further evidence of that. He went out there and filled up the zone. We made plays and he did exactly what we asked him to do.”

Jade Sikes earned a complete game after allowing just one run to Marengo, while Reed Jinright allowed two runs in a win over Autauga.

Reece Burbage earned the start in the championship round against Autauga and allowed three runs to help the Patriots earn the tournament championship.

“Reece picked up where he left off in our tournament,” Ponder said. “He was filling up the zone and had good velocity. He did his job.”

The Patriots will take on Crenshaw Christian Academy on Tuesday before traveling to Dothan to take on area rival Northside on Thursday, and Ponder hopes these stretch of games will help propel the Patriots for the stretch run to the postseason.

“It doesn’t matter what game you’re coaching, you always want momentum,” Ponder said. “It’s so important to have that when you are going into your big games.

The Patriots and Crenshaw will begin play this afternoon beginning at 3:30 p.m. with the junior varsity teams to follow shortly after.