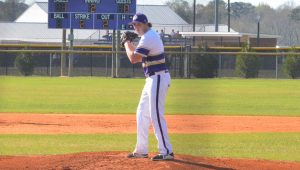 Landon Wilks had a dominating one-hit performance in Goshen’s 16-0 win over Red Level on Monday afternoon in Goshen.

The win for the Eagles improves their record on the season to 7-4.

“We hit the ball well today and we finally got some good weather,” said Eagles head coach Robby Kinsaul. “Landon threw the ball well. I think he threw 86 pitches through five innings. That’s a little high, but he was a little better today.”

Wilks threw all five innings of the shortened game for the Eagles. He allowed just one hit on a slow chopper to third base on Monday. He struck out 11 batters and struck out the side three times.

“He was just hitting his spots and did a good job doing that,” Kinsaul said. “He was throwing his second pitch for a strike. Any pitcher that can throw two pitches for a strike keeps the other team off balance.”

The Eagles jumped on the board first in the opening inning on Monday afternoon. Brian Redmon reached first after he was hit by the pitch and came around to score the game’s first run on a Jackson Kyzar single after he advanced to second on a wild pitch. The Eagles had a chance to add more in the inning, but a base running mistake by Cory Peterson helped the Tigers get out of the inning.

Wilks shut the Tiger offense down over the first three innings. He didn’t allow a hit and struck out seven batters. In the bottom of the third, his offense helped him out.

The Eagles scored four runs on six hits. Evan Rose, Redmon and Kyzar singled to load the bases before Peterson drove in Redmon on a single. Hunter Williams followed up with a single of his own to score Kyzar before Bunce grounded out to third, driving in Peterson. Tatum Phillips closed out the scoring on a single to score Zack Alford to make it 5-0.

After Wilks struck out the side for the third time in the top of the fifth, the offense put the game out of reach. The Eagles sent 16 batters to the plate and scored 10 runs on seven hits and four walks. Bunce, Redmon and Williams had an RBI each in the inning while Kyzar had two to bring the score to 16-0. In all, the Eagles offense faced three different Tiger pitchers in the inning.

The offense tallied 15 hits on the night with the majority of the damage coming from the top of the lineup. Kyzar led the Eagles with four hits, while Redmon and Williams each had three.

“There were a few spots in the lineup that we needed to get going and in the last four or five games they have,” Kinsaul said. “One through nine is getting on base and that is big.”

The Eagles will be back in action on this afternoon when they host Georgiana beginning at 4 p.m.