NOT QUITE ENOUGH: Trojans fall short to Mississippi State 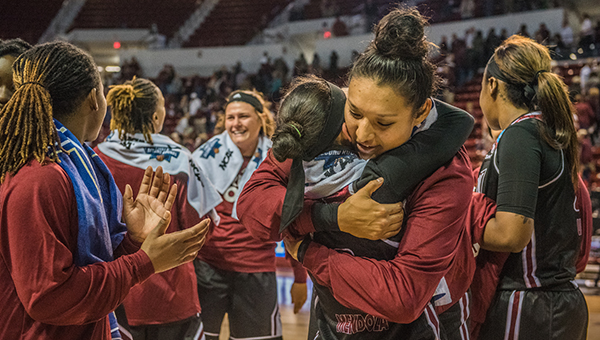 STARKVILLE, Miss. – The Troy Trojans were outpaced and outmatched in their 110-69 loss against the second seeded Mississippi State Bulldogs in the opening round of the NCAA Tournament on Friday, but their coach wasn’t discouraged.

“It was a fantastic experience to be able to compete at Mississippi State in the NCAA Tournament,” said Trojans head coach Chanda Rigby. “Of course the result wasn’t what we wanted, but we are very proud of what this team has accomplished.”

The Bulldogs threw the Trojans a curve ball from the tip off on Friday afternoon. Bulldogs head coach Vic Schaefer elected to play just one of his normal starters.

“We got behind the eight ball very soon,” Rigby said. “Blair (Schaefer) came in and hit some shots early in the game. We came up with a different game plan for the regular starting five. We were going to deny the ball to their best player. When they went to the different lineup, we got out of that. It changed what we were doing.”

The Trojans struggled, shooting just 31 percent from the field. And despite having made effective use of the rebound during the season, they were outrebounded 61-48 on Friday afternoon.

“They have big players on their team. They are all bigger than us,” said Caitlyn Ramirez. “That is something that we knew coming into this game. We knew we had to be physical. I just wish that I were more physical with them. We had times when we were down where we didn’t box out at all.”

“We still got 23 offensive rebounds,” Rigby said. “Its not like we weren’t rebounding. What happened a lot of times was that we were getting tips on the ball and it ended up in their hands.”

The Trojans had to contend early with Starkville native and Schaefer’s daughter Blair Schaefer who scored the Bulldogs first 11 points of the game, including two three-pointers on her way to 13 first quarter points despite battling an illness on Thursday. The Trojans were outrebounded 12-7 in the opening quarter and went into the second trailing 27-21.

The Bulldogs took control in the second quarter thanks to a 21-1 run to close out the first half, thanks to the Trojans not making field goal in the final 6:23. Victoria Vivian nailed a three-pointer at the buzzer to give the Bulldogs a commanding 56-27 lead heading into halftime.

The Trojans shot 29 percent in the first half compared to 45 percent by the Bulldogs.

The Trojans went another two minutes in the second half before converting from the field.

The Trojans continued to struggle in the third quarter. They were outscored in the quarter 32-19 and entered the fourth trailing 88-46.

Troy outscored the Bulldogs in the fourth quarter 23-22, thanks in large part to freshman Amber Rivers, who finished with 11 points in the game, but it wasn’t nearly enough to catch the physical bulldogs.

The Trojans had two players finish in double figures on Friday, along with Rivers, Banks finished with 14 points. Senior Ramirez finished her final game with the Trojans with five points and four rebounds.

Even though the Trojans didn’t have the outcome they were looking for, they did make it to their second straight tournament, but now Rigby and the Trojans are hungry to take the next step.

“Every year we have been standing on the shoulders of the team of the year behind,” Rigby said. “Still to this point, it seems like we have made this step and we know we can go to a conference tournament and win a championship, but that is kind of what is defining us right now is Sun Belt Conference champions. Our next step is where we are competitive in the NCAA Tournament. This is valuable experience for us.”