Down and out: Trojans fall behind early in loss to the Rebels 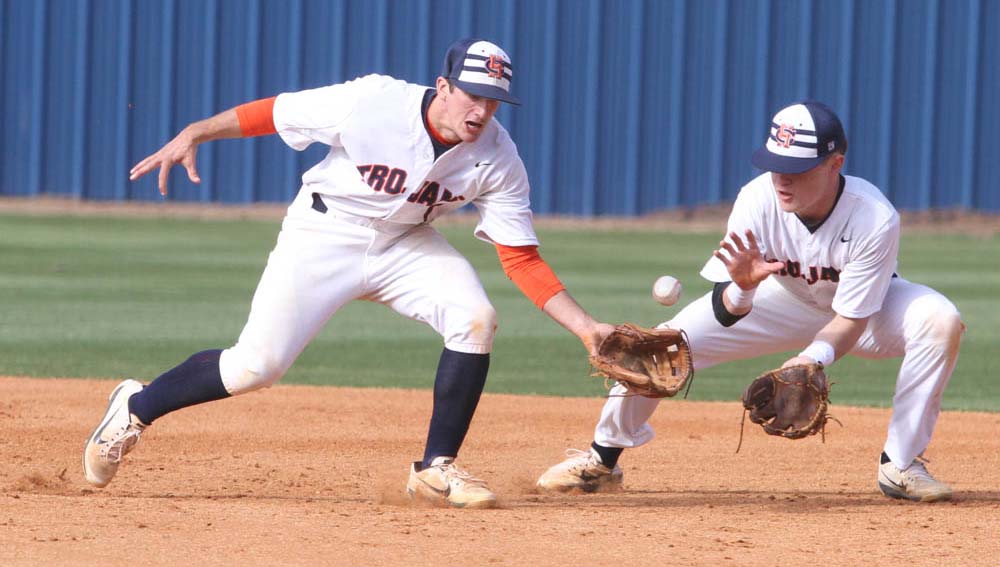 G.W. Long came to Troy Thursday afternoon, and as the temperature broke and began to warm up, so did the bats of the Rebels as they claimed an 11-3 win over Charles Henderson High Thursday at Hogan’s Hole.

The Rebels quickly scored five runs in the top of the first inning when Collen Search doubled, Cole Hatcher reached on an infield error, Mackenzie Hicks got on with a fielder’s choice, with Dylan Register, Bailey McDaniel, Wells Deloney and Matt Snell hitting consecutive singles for the 5-0 lead.

CHHS responded with two runs in the bottom of the first inning as Jabronski Williams singled, Hunter Reeves doubled and Jackson Murphy singled to cut the lead to 5-2.

The Trojans tacked on a single run in the bottom of the second inning when Charlie Tisdale singled, Noah Lowery advanced the runner on a sacrifice bunt and Grant Hughes reached on an error to make the score 5-3.

Reeves ended the day with two hits for the Trojans while Jabronski WIlliams, Murphy, Bryson Gandy and Tisdale had one hit apiece.

CHHS Head Coach Josey Shannon told his team after the game that they got beat by a better team, but his Trojans must put it on themselves to get better immediately.

“Obviously GW has a really good team,” said Coach Shannon. “They had 16 hits, they are well-coached and have been many years with the Miller tradition (former coach Earl Miller and current coach Drew Miller). Their players responded and they are very aggressive, they want the baseball and know what to do with it when they get it, and that is something we are not doing.

“Honestly we should have got beat 6-3, minus the five errors. They are still a better team but we have got to learn how to compete a little bit better. What I told our team after the game was, yes, we played a better team, but we did not give ourselves a chance to win in the way we approached our at-bats. We have 11 seniors, and my question to them was, what kind of legacy and identity do they want to leave. We are now 3-7, and we are either going to shut down or fight back and make our school proud. It is not always how your start but how you finish. We are on the verge of doing some great things, and I believe in this team, and I believe we are going to do some good things.”

CHHS returns to action Saturday in Troy at 11 a.m. against Arab and then at 4 p.m. against Northview.