Early success: Patriots score early and hold on to a 4-2 win over Lakeside in area play opener 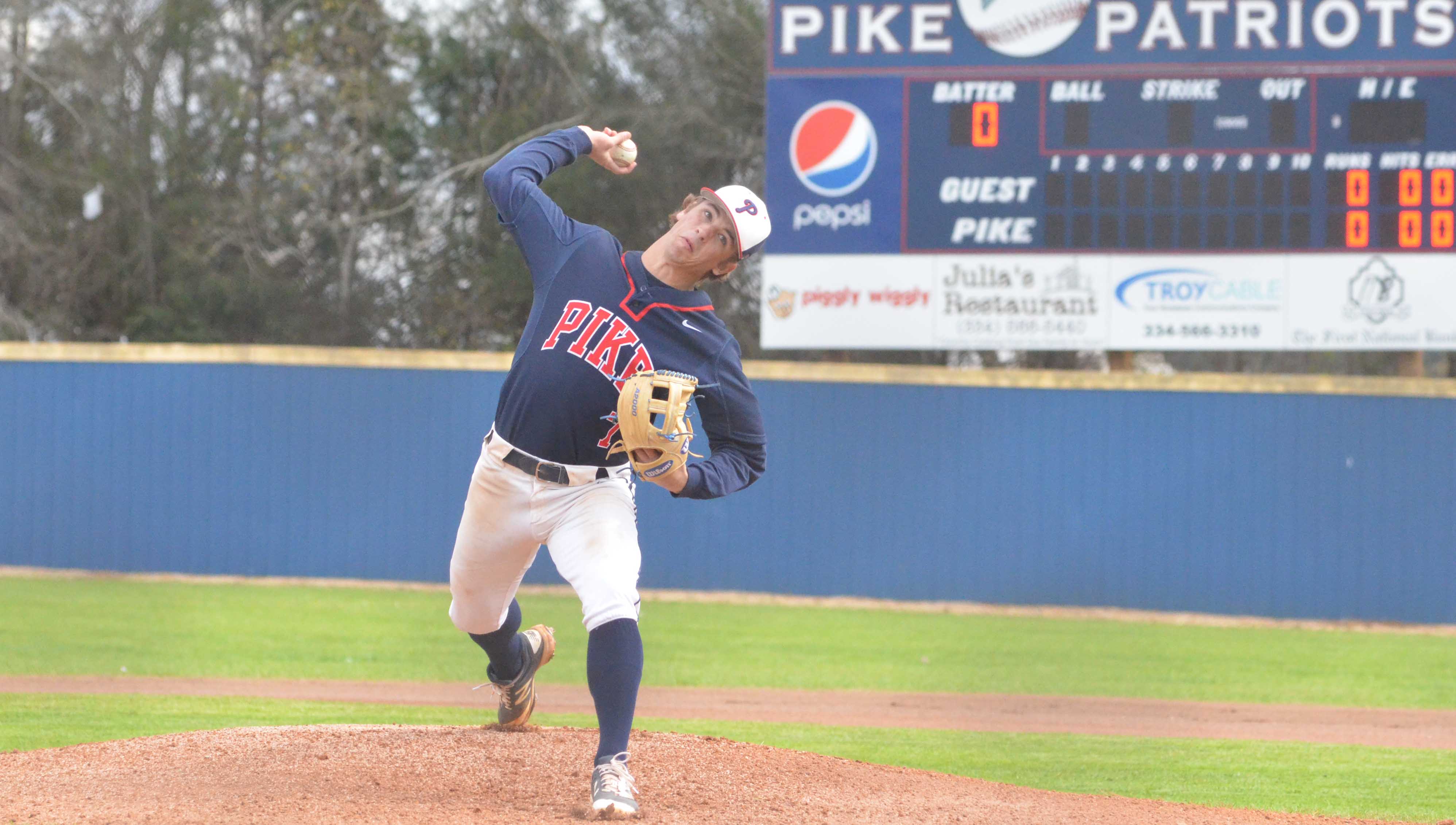 Photo/mike hensley
Reece Burbage and the Pike Patriots defeatd the Lakeside Cheifs 4-2 in the Class 3A area opener on Tuesday night in Troy. Burbage pitched a complete game and struck out nine batters.

The Pike Patriots scored all of their runs in the opening inning of a 4-2 win over area foe Lakeside Tuesday afternoon.

The win for the Patriots brings their area record to 1-0 on the season.

“We are very fortunate to come away with a win today,” said Patriots head coach Allen Ponder. “We need to get better offensively. We came out and put up four runs, but then we got complacent and quit hitting the baseball. We have to get much better in that area if we want to make a deep run in the playoffs.”

“Reese threw the ball well,” Ponder said. “He was up in the zone a little more today. He did a good job when we grabbed the lead at filling up the zone and made them put the ball in play. It was another quality start for him.:

Burbage shut the Chiefs down in the top of the first inning with two strikeouts before the Patriots offense went to work. In the bottom of the first, the Patriots sent eight batters to the plate and scored four runs. Cody Hollis and Hunter both reached base to begin the inning. Hollis came in to score on a single by Tyler Hussey to make it 1-0. Reed Jinright scored the second run of the inning when he stole home after reaching base on a single. The big hit of the inning came when Cole McWhorter smashed a pitch over the high wall in left for a two-run homerun to put the Patriots up 4-0.

“That was always nice to see,” Ponder said. “We have to be a team that puts the ball in play, but at the same time its nice to see us unload on one and hit it out of the ballpark. It was nice to see a complete game where we are able to play small ball and hit the ball in the gaps.”

The Chiefs cut into the Patriots lead when they hit back-to-back doubles to score their first run of the game, bringing the score to 4-1 in the fourth. Burbage battled back and stranded two runners on base.

The Chiefs added another run in the sixth inning. Burbage struck out the leadoff batter, but a dropped third strike and an error by McWhorter led the batter to end up on second base. He came around to score on a sacrifice fly to bring the score to 4-2.

The Patriots finished with four hits by McWhorter, Hollis, Hussey and Wood Jinright, all of which came in the first inning.

The Patriots will have three more area games, but Ponder is pleased with the start.

“It’s always good to get off to a good start especially in area play,” Ponder said. “This tells the tale of the playoffs. For us we are very proud to get a win. We still have areas to improve but we will take this win and build off it.”

The Patriots will be back in action on Thursday when they host Abbeville Christian at 3:30 p.m.X