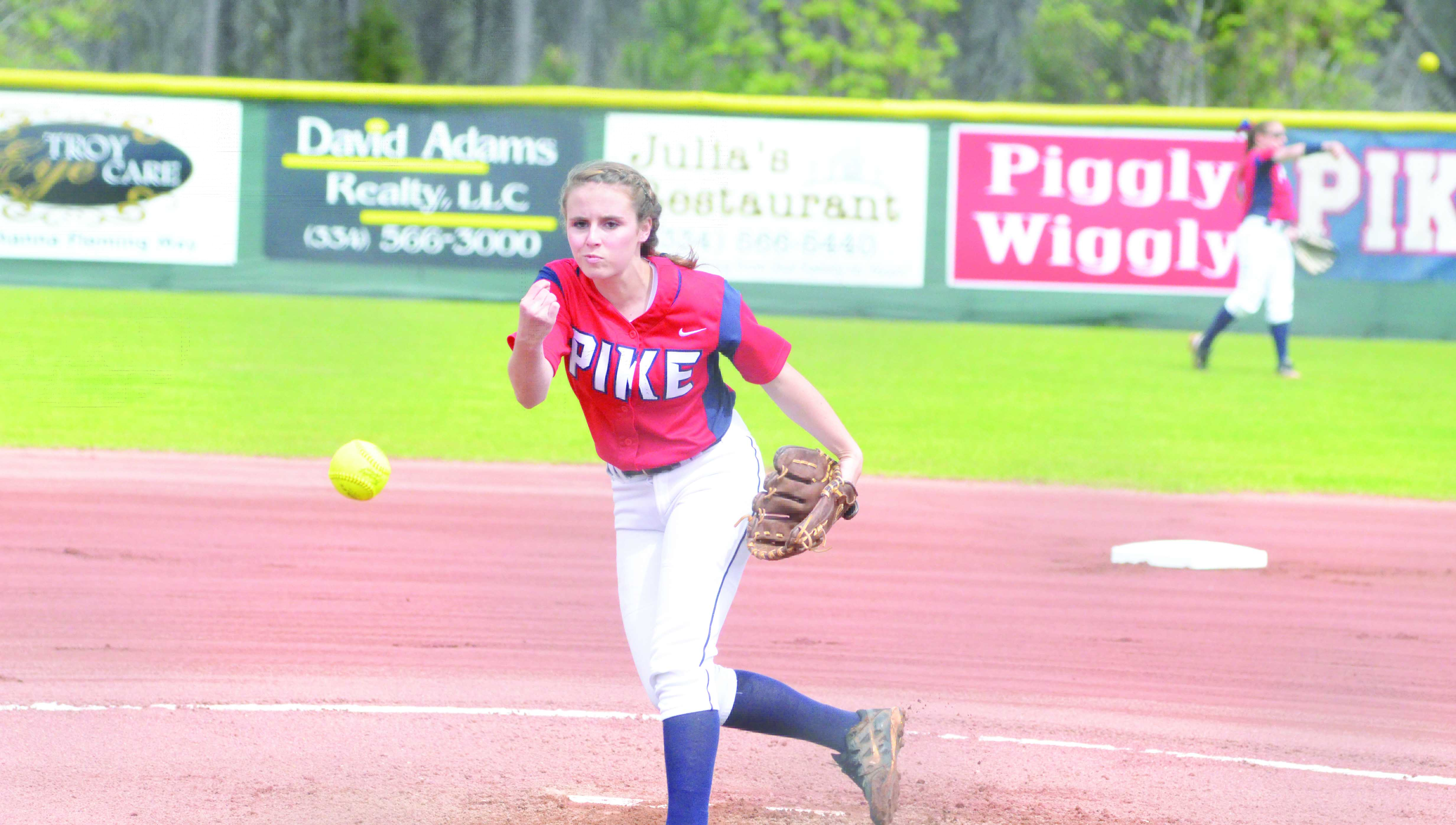 The Pike Liberal Arts Patriots defeated Abbeville Christian 7-4 after Danielle Brown (inset) hit a walk off triple. The Patriots will be back in action on Saturady at 4 and 5:30 p.m.

Danielle Brown hit a walk-off triple with the bases loaded to give the Pike Patriots a 7-4 win over Abbeville Christian in game one of the Jonah McWaters Softball Tournament Friday afternoon.

With the game tied at four in the bottom of the fourth inning of a timed contest, Brown smacked a ball over the right fielder’s head, to score Emily Williamson, Haleigh Dewberry and Morgan Bundy and give the Patriots the walk-off victory.

“It was a good game,” said Patriots head coach Robert Rollan. “The girls played a great game against a really good team. We got some timely hitting and the little (Dannah) Dawson girl pitched her heart out.”

Pike’s win over Abbeville was the first of two games for the Patriots on Friday. They played Crenshaw County in the night cap. For coach Rollan game one was a great start.

“It was a good first win of the tournament against a good team,” Rollan said.

Dawson pitched the first four innings for the Patriots and allowed four runs.

It was the Patriots who scored first on Friday afternoon. They sent seven batters to the plate and scored three runs on two hits and an error.

Callee Jinright pushed the lead out to 3-0 when she singled in Dendy.

The Patriots extended their lead to 4-0 thanks to some more timely hitting. With two outs in the inning, Grice singled in Dewberry.

“We have been working on that all year,” Rollan said. “It all kind of came together for us today.”

The Generals battled back in the third inning, when they scored two runs thanks to three straight one-out singles to cut the Patriots lead to 4-2.

With time starting to slip away, the Generals came back to even the score in the fourth with two runs on two hits.

In the final half-inning of the game, Williamson, Dewberry and Bundy reached base on a single, a double and walk. Knowing that one run would end the game, the Generals elected to move the infield and outfield.

The Patriots were ahead of Crenshow County 6-0 in the second inning at the time of press. The Patriots will be back in action on Saturday at 4 and 5:30 p.m.