Tourney time: Patriots make easy work out of Crenshaw County in round one of tournament 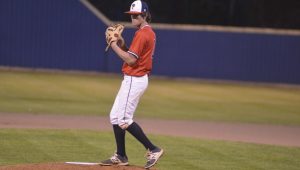 Photo/Mike Hensley
Tristan Carter took the ball for the Pike Patriots as the starting pitcher in their 10-1 win over Crenshaw County in the opening round of the Jonah McWaters Tournament on Thursday night in Troy.

The Pike Patriots took advantage of Crenshaw errors in their 10-1 win over the Cougars in the opening round of the Jonah McWaters Tournament on Thursday.

The Patriots forced seven Cougar errors and improved their record on the season to 8-2.

“We took advantage of mistakes,” said Patriots head coach Allen Ponder. “We understand that if we put the ball in play we have the team speed and good things can happen.”

Tristan Carter took the mound for the Patriots and lasted four innings. He gave up one run on three hits.

“I thought he threw the ball well,” Ponder said. “Tristan is one of those kids that has a ton of potential. If we can get him down in the zone he is going to start getting some of those calls.”

The Patriots finished with a total of six hits led by Tyler Hussey with two hits.

The Cougars scored in the first inning when Carter walked a Crenshaw batter with the bases loaded. The Patriots got back-to-back walks by Wood and Reed Jinright with two outs.  Cole McWhorter followed with a two-run double to  give the Patriots a 2-1 lead. Tyler Hussey reached on an error by the center fielder to score pinch runner Cason Murphree to give pike a 3-1 lead after one.

The Patriots added to their lead in the bottom of the second. Trevor Barron began singled and advanced to second on a throwing error. Hunter Jones drove in the first run of the inning on a dropped pop fly by the pitcher. He came around to score on a wild pitch to give the Patriots a 5-1 lead heading into the third.

The Patriots continued to take advantage of Cougar errors in the third inning when they tacked on five more runs thanks to three errors and a wild pitch. Cody Hollis reached on an error to score Jade Sikes for the first run of the inning. Jones reached on  an error to score Reece Burbage and Trevor Barron. The final two runs of the inning came on one pitch when Barron and Jones scored on a wild pitch to give the Patriots a 10-1 lead.

With the win the Patriots advance to the winners bracket of the tournament where they will play Tuscaloosa Academy this evening at 6 p.m.