Troy moves on with win over ASU 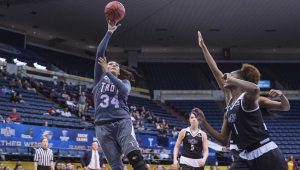 submitted Photo/Chris davis
The Troy Trojans had a record-breaking performance during their 105-72 win over Arkansas State in the quarterfinal round of Sun Belt Conference Tournament on Thurday night.
Caitlyn Ramirez led the Trojans with 25 points and 22 rebounds.

The Troy Trojans broke the Sun Belt Conference Tournament record in both rebounds and shots in a 105-72 win over the Arkansas State Red Wolves on Thursday.

With the win the Trojans advance to Saturday’s semifinals.

The Trojans finished the night with 86 rebounds, 21 more than the previous record of 65. It is the second largest amount in NCAA history

The Trojans shot just 31 percent, but coupled with their rebounds and the defense holding the Red Wolves to 38 percent, the Trojans were able to walk away with the easy win.

It was the fourth time this season the Trojans eclipsed the century mark. They broke a tournament record with 107 shots on the night.

Caitlyn Ramirez led the way in both points and rebounds finishing with a double-double that consisted of 25 points and 22 rebounds. Claresa Banks also finished in double figures with 19 points. Jayla Chills finished with 12 and Harriet Winchester finished with 10.

The Trojans rode into the second quarter with a 23-15 lead. The Red Wolves attempted to cut into the Trojans lead, but the Trojans outscored Arkansas State in the quarter 26-25 and took a 50-41 lead into halftime.

The Trojans outscored Arkansas State 55-31 in the second half to secure the easy win.

With the win the Trojans will now get set to take on second-seeded Texas Arlington who beat South Alabama on Thursday 65-53.

The Trojans and Mavericks split their two meetings this season with each team wining on their own court. Tip off is scheduled for 7:30 on Saturday night in New Orleans.