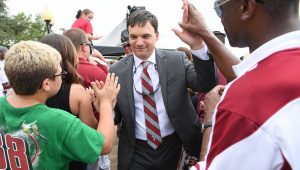 Messenger Photo/thomas graning
Troy head football coach Neal Brown agreed in principal to a four-year contract extension. Brown and the Trojans finished 2016 with a 10-3 record and a win in the Dollar General Bowl.

After a record-breaking season in 2016, Troy University and head football coach Neal Brown have agreed in principal to a four-year contract extension.

Athletic Director Jeremy McClain confirmed the extension on Monday and is excited for the future of Troy University football.

“We are really excited about the direction of the program,” McClain said. “One of they keys of continuing our level of success is continuity with the coaching staff. That was really one of our objectives in trying to reach an agreement.”

The extension of Brown’s contract will run through the 2021 season and McClain also indicated there is an option that could stretch into 2022 as well.

Brown will not be the only coach to get an extension. There are also plans in the works to extend the contracts of the assistant coaches as well.

“We are trying to keep Brown and his staff here as long as possible,” McClain said. “There are still a few things to finalize, but we are excited that we are heading into the direction to extend all those guys and keep them on board.”

Brown and the Trojans finished the season with 10 wins (10-3), good enough for the most ever in the programs FBS history.

The Trojans also became the first Sun Belt Conference participant to spend time in the Associated Press’s Top 25 Poll after their win over Appalachian State.

Although the Trojans dropped two of their final three games, the Trojans represented the conference in Mobile’s Dollar General Bowl where they defeated Ohio 28-23.

“This is another great step,” McClain said. “Coach Brown’s leadership has been crucial to turning this thing around. With the new facility coming on board, with the level of recruiting classes that we have been able to bring in this year and previous years, I think all those things together really point towards to a positive direction for the program. We will want to continue that momentum. I hope the folks are excited.”

McClain believes that the final things will be finalized in the next couple of weeks.

“With all the contracts in play, we have a few things that we have to tighten up,” McClain said. “We feel good about where we are at and we should have all that completed in the next couple of weeks.”