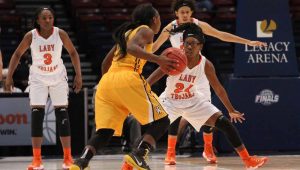 Photo/dan smith
The Charles Henderson Lady Trojans took on the Wenonah Dragons in the Saturday morning’s Class 5A State Championship in Birmingham. Despite Maori Davenport’s record-breaking performance, the Trojans fell to the Dragons 55-52.

Despite Maori Davenport’s record-breaking performance Saturday morning, the Charles Henderson Lady Trojans fell to the Wenonah Dragons 55-52 in the Class 5A State Championship.

The Trojans held a five-point lead in the game’s final minute, but foul trouble and turnovers led to the eventual win for the Dragons.

“They played better then we did and they scored more points than we did,” said Trojans head coach Dyneshia Jones. “We had turnovers and Maori fouling out certainly didn’t help.”

Davenport fouling out doesn’t overshadow her performance on the big stage Saturday morning, The sophomore finished with a record-setting triple-double that included 20 points, 25 rebounds and a state record 19 blocked shots.

Davenport wasn’t the only to show up on the grand stage in Birmingham over the last week. According to coach Jones the entire team proved they belong to play with the best teams in the state, and they didn’t let the moment get too big for them.

“We are used to being there and we didn’t let the stage get too big,” Jones said. “They fought for it. Wenonah is a good team. It’s hard to win a game with 34 turnovers.”

The Trojans wrapped up the 2016-2017 season with a record of 30-6 record, but after making it to Birmingham for the third time in four years and making their first-ever state championship, this was the season to remember for coach Jones and the Trojans.

“We had a lot of fun,” Jones said. “We won some games and we lost some games. It helped prepare us for the championship game.

The Trojans will have all but one player return next year and they feel like they can make the trip back to Birmingham for the fourth time in five years. To do that, they will once again have to start from the bottom up.

“It’s like every other team,” Jones said. “We are going to continue to work hard. We can’t think that just because we made it this far that it’s automatic that we will be back. We have to put in the work and work even harder.”

Davenport will be one of the players returning next season, and when she does, she may be carrying the title of Miss Basketball as the state’s top female basketball with her.

The announcement will be made in early April and Jones believes Davenport has a shot.

“She would be very deserving,” Jones said, “As far as her stats goes, it shows; she has a good chance to win it. If she doesn’t win it she is going to continue to work hard.”