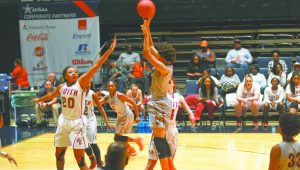 Photo/mike hensley
The Charles Henderson Lady Trojans are heading back to Birmingham for the third time in the last four years. They will be taking on Arab in the semi finals of the Class 5A State Championships on Wednesday night beginning at 6 p.m.

The Charles Henderson Lady Trojans return to the Class 5A State Championships for the third time in four years on Wednesday.

Tipoff between the Lady Trojans and Arab is 6 p.m. at the BJCC Legacy Arena in Birmingham.

The Trojans made their way through the South Regional in Dothan defeating Faith Academy 62-45 and rival Eufaula 56-55.

“Things are going good,” said Trojans head coach Dyneshia Jones. “We are trying to take today (Monday) like a regular day and a regular practice. We are going over the basic things, like dribbling and passing.”

The Trojans will be face an unfamiliar opponent in Arab.

“We can work on some of the things that they do, but we have to make sure we do everything right on our end,” Jones said.

In Dothan, the Trojans’ offensive attacked featured strong effort from tournament MVP Maori Davenport inside as well as accurate shooting from behind the arc by both Niaira Jones and Whittaka Lowery.

Lowery, a freshman, was an under-the-radar surprise.

The Trojans have used this opportunity to address weaknesses in their game.

“You can always keep improving,” Jones said. “We are not a perfect team, I wish there was a perfect team. There is always room for improvement. I don’t care if it’s a win, I tell them good job, but we have to improve.”

Two straight turnovers in the final minute against the Tigers nearly ended the Trojans season.

“It’s hard to work on turnovers when you are playing your own team,” Jones said. “We have been working on taking care of the basketball and making passes. We always reiterate that during practice.”

Jones believes the challenges the Trojans faced on Thursday will only help them in Birmingham.

The Trojans hope to compete for the state title.

“The majority of the team have been there,” Jones said. “We are excited about playing and making it to state. We have other goals, we have been there and we are used to the court. We need to stay humble and continue to win.”