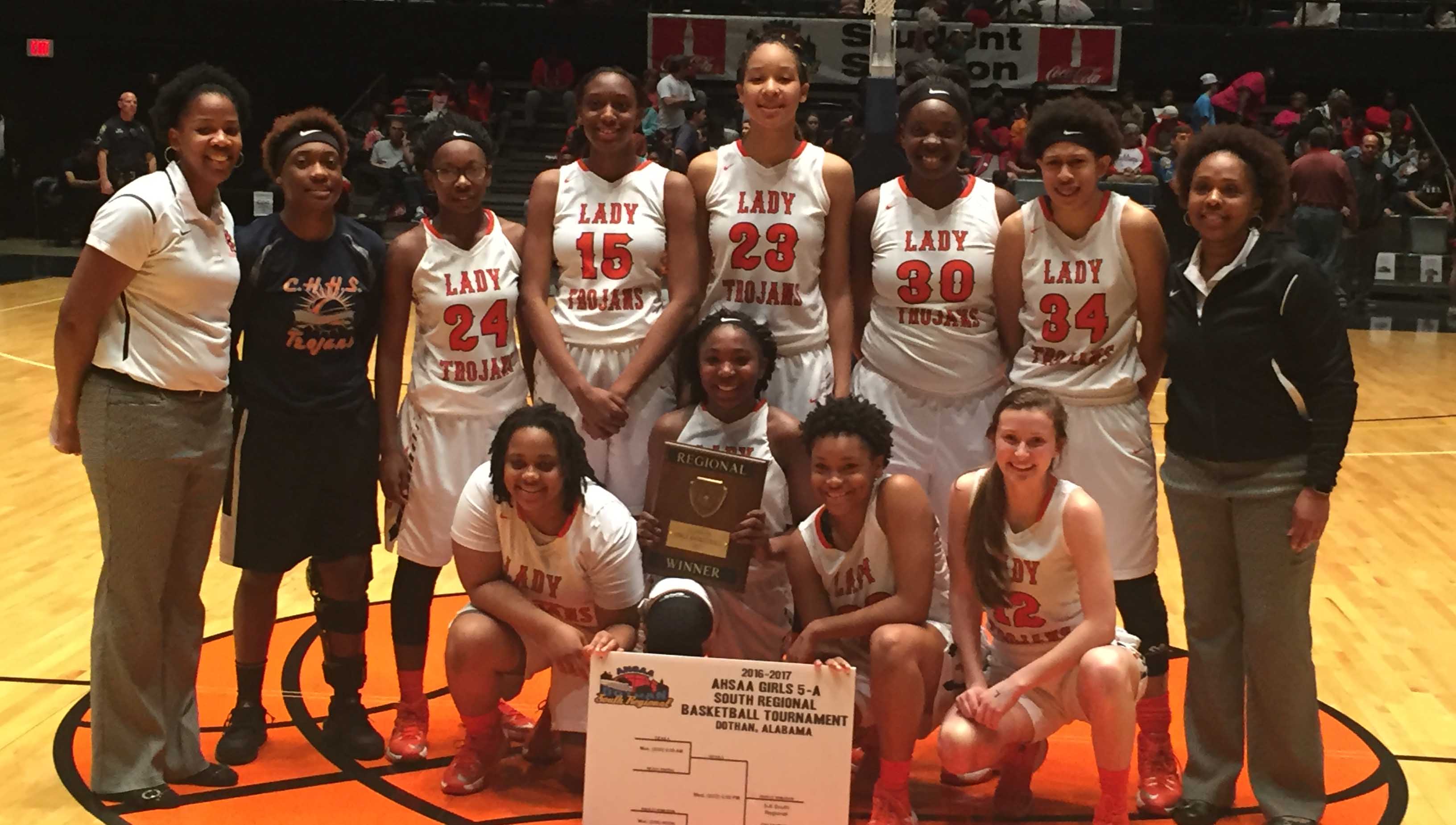 Photo/mike hensley
The Charles Henderson Lady Trojans scored in the final seconds on Wednesday to secure the Class 5A South Region Championship against rival Eufaula. The Trojans will now get set to head to Birmingham for the state semi finals next Wednesday.

Sophomore Maori Davenport blocked the would-be game-winning shot in the final two seconds of the Class 5A Southern Region finals Wednesday to defeat Eufala 56-55 for the championship.

The win earns the Trojans a spot in the State Tournament’s final four in Birmingham.

The lead changed hands a total of 18 times on Wednesday afternoon in a game that literally went down to the final second.

“I told my girls not to give up,” said Trojans head coach Dyneshia Jones. “We were down by one and some of them had their heads down. I called a timeout and told them it’s not over until the buzzer goes off. They went out there and they fought.”

The game not only changed hands 18 times, but neither team lead by more than five points.

The Trojans shot just 26 percent in the opening quarter and entered the second quarter trailing the Tigers 16-11.

In the second, the combination of Davenport and Niaira Jones began to click. The two combined for 11 points and the Trojans outscored the Tigers 18-10 in the quarter to enter the half holding a 29-26 lead.

The lead continued to go back and forth in the third quarter. The Tigers had a strong finish to the quarter by going on a 9-0 run, leading to a 40-39 advantage going into the fourth quarter.

Both teams held a share of the lead in the games final two minutes. With just 45 seconds remaining and the Trojans up by one, Charles Henderson turned the ball over on back-to-back possessions to fall behind 55-54 with 35 seconds left.

Davenport took over from there. She scored deep inside the paint to give the Trojans a one-point lead with just five seconds remaining.

“It wasn’t designed for Maori, but I knew she was going to get the rebound,” Jones said.

After a Tiger timeout, Eufaula raced the ball down the court and attempted a last-second heave just outside the paint, but Davenport’s six-foot, four-inch frame got in the way as she blocked the shot and sealed the win for the Trojans.

“She did great at the end and she did great the whole game,” Jones said. “They boxed her and it was hard for her to get her shots at certain times, but she still played her part. That block at the end was phenomenal. It saved us.”

“After I scored, I knew I had to get back on defense,” Davenport said.

For their efforts in Dothan, Tatyana Siler, Jones and Davenport were all named to the All-Region team, with Davenport earning MVP honors.

The Trojans will head to Birmingham next Wednesday for their second consecutive trip to the semifinals.

“When India (Blakely) left last year, everybody thought it would be hard for us,” Jones said. “These girls are so young. Throughout the summer, all the hard work proved a point. They stuck with it and they proved a lot of people wrong.”

The Trojans will play the winner of Arab and Mortimer Jordan on Wednesday.