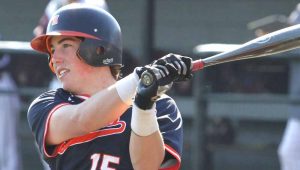 Photo/dan smith
Jackson Murphy takes a swing for Charles Henderson last season. Murphy and the Trojans will begin the 2017 season on Friday morning when they begin the annual Terry Sikes Tournament.

The grass is green and the new walls are up at Hogan’s Hole at Charles Henderson High School– the only thing left to do is play ball.

The Trojans kick off their 2017 baseball season with the annual Terry Sikes Memorial Tournament on Friday morning.

Teams from around the state will flock to Troy to take part in the three day round-robin tournament to honor the late great Terry Sikes.

“We are ready to go,” said first-year Charles Henderson head coach Josey Shannon. “I have always heard a lot about it. It’s a great memorial for Terry. Everybody that I have known and met from around these parts has had nothing but great things to say about the man. We are going to try our best to recognize him in a positive manner.

Three of the five teams that the Trojans will play in the tournament will be teams from Class 7A and should offer them a stiff test to begin the season.

The Trojans will play five games in a two-day span to start the tournament, putting an early strain on the players.

“That is asking a lot from our pitching staff this time of year,” Shannon said. “We have eight to 10 guys that can throw strikes, so we will have plenty of pitching.”

The tournament will not only feature strong talent on the field, but it will also give the local fans an opportunity to get reacquainted with some familiar faces. Former head coaches David Irons of Oak Mountain and Steve Garrett of Florence will make their return to Hogan’s Hole. For Irons, it will be his first return since he left Troy following the 2015 season.

The two coaches led the Trojans to a combined three state titles.

“I have known coach Irons for 10 years,” Shannon said. “The excitement level for me is because I get to see a friend. I know of the success that he had here and we give that respect for him. He was loved within the community here and they hated to see him go.

“He was loved and a great man. I am sure there are a lot of people looking forward to reuniting with him and checking in on him.”

The tournament will be played at both Hogan’s Hole as well as Troy University’s Riddle-Pace Field.

“Luckily Troy University’s baseball team will be playing out of town,” Shannon said. “We are fortunate that coach Smartt is allowing us to play there. It’s always a good selling point for his school. There may be some guys that are considering coming here and it’s another opportunity to see their facilities and what they have to offer.”

The Trojans will begin day one of the tournament with a triple-header beginning at 10 a.m., followed by games at 12:30 and 8 p.m.