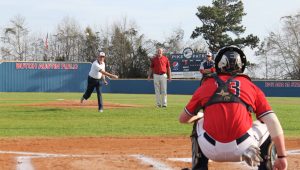 submitted photos
Delaney Kervin threw out the first pitch before the Pike Patriots took on Edgewood in their home opener on Monday afternoon. Kervin was an original faculty member when PLA opened it’s doors in the fall of 1970. He later was named Headmaster, a position he held for 31 more years. He was elected to the Alabama Independent School Association (AISA) Hall of Fame in 2000.