Troy’s Gracie Williams, 15, took a 140-yard shot to bag a big buck on a hunt in Pike County last December. A photo of her trophy is the winner of the fifth annual Alabama Black Belt Adventures Association Big Buck Photo Contest. 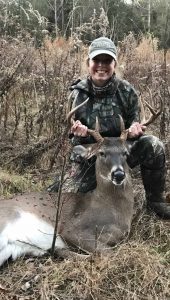 Gracie’s photo earned more than 400 “likes” on the ALBBAA’s Facebook page in the contest that ran throughout Alabama’s 2016-17 deer season. The winning photo was one of 33 entries that drew a total of more than 2,000 votes.

“We are happy to again help spotlight the great hunting opportunities that exist in Alabama’s Black Belt with our Big Buck Photo Contest,” said ALBBAA Project Director Pam Swanner. “Deer hunters had another great season this year and Graci’s trophy buck is a fine example of that.”

The winning deer was the second buck and fourth deer that Graci has harvested, according to her father, D.J. Williams. He was accompanying his daughter on the hunt. “When she pulled the trigger, it fell like a sack of bricks,” he said. “I don’t think in over 25 years of hunting I’ve ever shot one myself that fell so fast.”