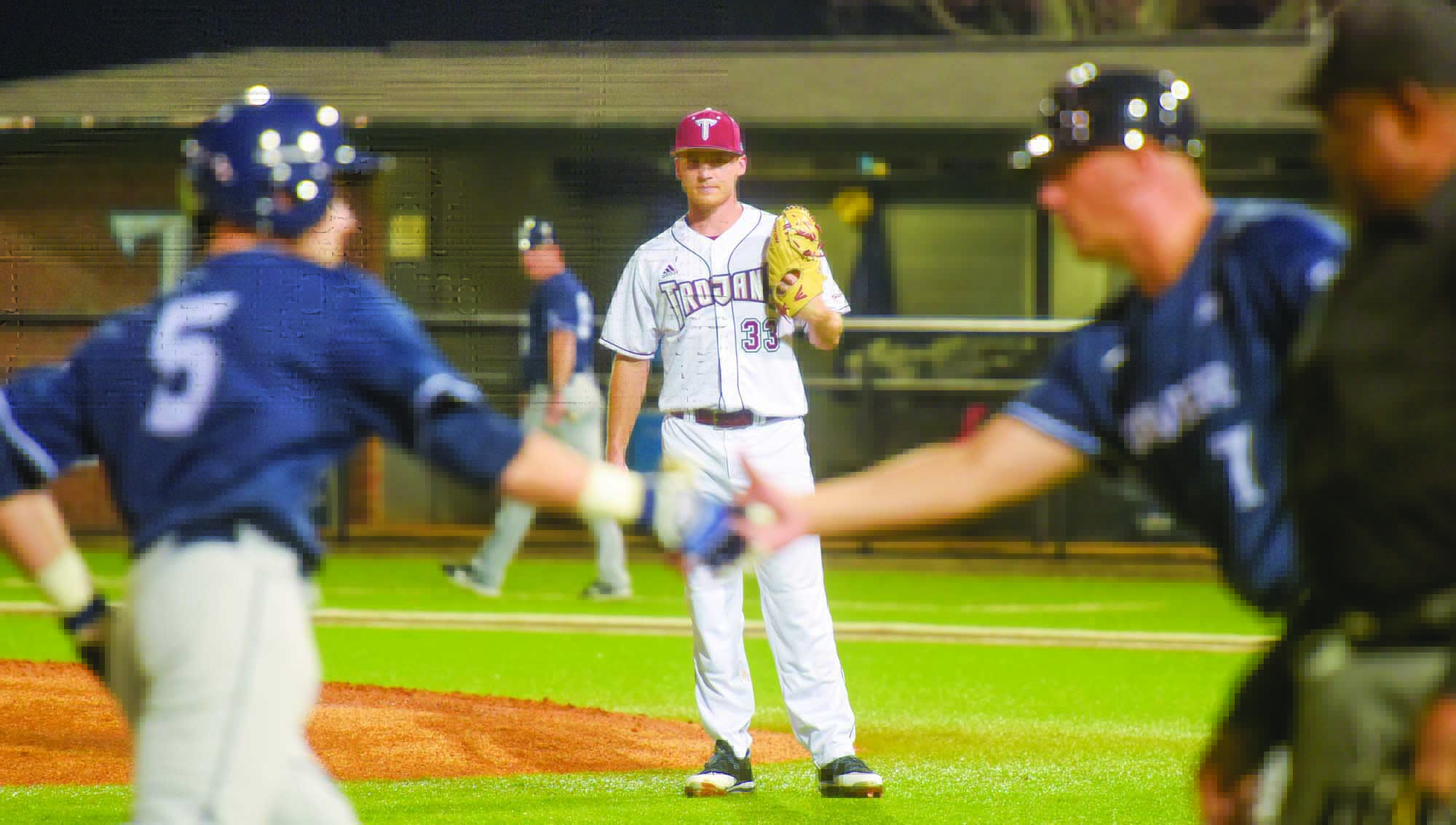 Photo/Jonah Enfinger
The Troy Trojans took on the Xavier Musketeers on opening night at Riddle-Pace Field on Friday. The Musketeer’s spoiled the party by defeating the Trojans 6-2.

The Trojans offense struggled as the Xavier Musketeers spoiled the opening night festivities, defeating the Trojans 6-2 on Friday night in front of a record crowd.

“A lot of credit to Xavier. I though they were the better team tonight,” said Trojan head coach Mark Smartt. “They played better.”

The dominance started early, as the Trojans struggled to get just two hits in the first inning and only three on the night. “Their guy (Zac Lowther ) was good to start the game,” Smartt said. “We had him on the ropes in the first and then he was really good the next four.”

The Musketeers were able to take a quick 3-0 lead in the opening inning of play. Chris Givens reached on a leadoff walk and advanced to third on a throwing error by Chase Smartt. Givens came around to score on a single to make 1-0. Nate Soria made it 3-0 when he blasted a Corey Childress pitch over the left field wall.

The Trojans answered quickly on a double by Brandon Lockridge to score Matt Hathcock and sacrifice fly by Joey Denison to score Matt Sanders to bring the score to 3-1.

Both pitchers settled down in the next two innings of play. Childress shut down seven consecutive batters heading into the fourth inning and struck out three batters in the process.

The Musketeers finally broke through in the fourth inning when Will Larue singled in Mitch Gallagher to increase their lead to 4-2. Gallagher was in scoring position after a controversial call as the Trojans attempted a double play. The Trojans appeared to drop the ball on the transfer and the umpire called the runner Gallagher safe at second base, sending Smartt out of the dugout.

Childress couldn’t make it out of the fifth inning, giving up three hits on the first three batters. Lance Johnson took over and stranded two base runners, keeping the score 5-2 after four and a half.

The Musketeers added single runs in both the fifth and sixth inning and took a 6-2 lead into the bottom of half of the seventh inning.

Lockridge led the Trojans with two hits on the night.

Childress took the loss for the Trojans. He went 4.1 and allowed four earned runs on seven hits.

“I thought Corey handled Friday night well; he just wasn’t as sharp early,” Smartt said. “He got better. There was a long delay on the argued call that I thought was a miss, but that is baseball. I probably should have taken him out after that inning … that was my mistake.”

In all the Trojans sent seven pitchers to the mound on Friday night.

“It was our plan. We have so many young kids,” Smartt said. “There were several tonight. You saw flashes of what they are capable of then you see the nervous, jittery freshman,” Smartt.

The Trojans return to the field this afternoon for a double-header against the Musketeers beginning at 2 p.m.