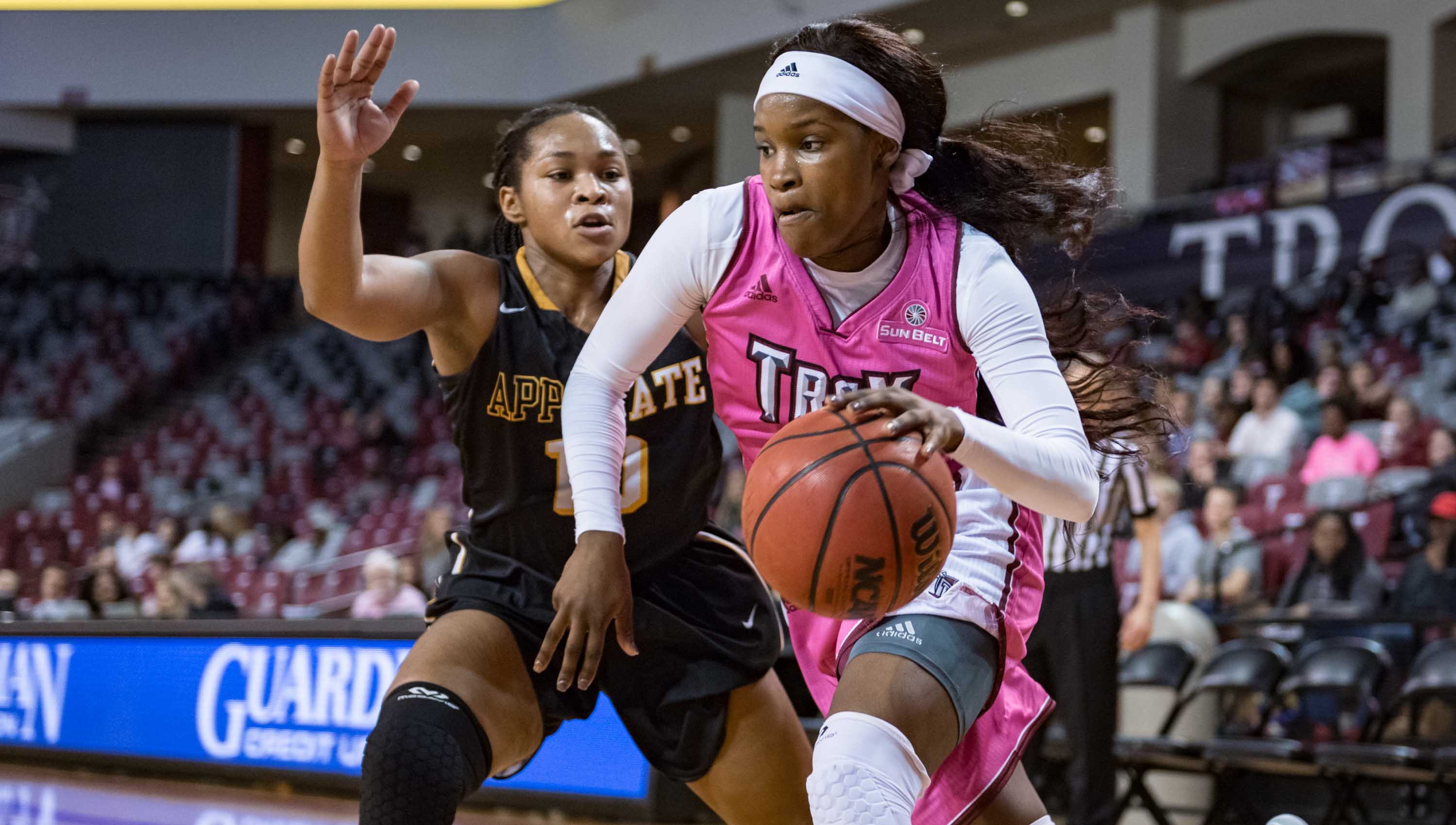 The Troy Trojans withstood a strong Appalachian State comeback in their 86-77 win over the Mountaineers on Thursday.

“We have been looking forward to this game for a long time now because this team plays so much like us,” said Troy head coach Chanda Rigby. “We shot a little better then they did. They got more shots than we had, which I didn’t like. We missed a lot of opportunities to shoot the ball because we turned it over before we shot.”

The win was important in rebuilding the team’s confidence after a loss to Louisiana Lafayette on Saturday.

“Our hearts were so broken from that last loss that I was concerned about getting back up,” Rigby said. “Our team believes they are winners. They believe losing is what we did, not who we are. It was so important to answer that ugly loss with a win.”

The Mountaineers jumped out to an early 11-4 lead. The Trojans closed the gap at 16-16 but the Mountaineers took an 18-16 lead into the second period.

Caitlyn Ramirez gave the Trojans their first lead of the game at the 7:45 mark of the second quarter with when she was fouled after making a shot. The Trojans took a 36-32 lead into the half.

Jayla Chills led the Trojans with 13 points in the first half, shooting 5-9 and 2-2 from behind the arc.

With a 45-42 lead in the third, Ramirez scored seven straight points as the Trojans went on a nine-point run. The Trojans led by as many 15 points in the quarter and went into the final quarter holding a 62-51 lead.

The Mountaineers were able to get to within three points in the fourth quarter at 67-65. From that point on the Trojans outscored the Mountaineers 19-12 to secure the win.

Chills led the way for the Trojans with 27 points on 9-15 shooting and she went a perfect 4-4 from behind the arc. Chills’ 27 points was a career high. Ramirez picked up a double-double in the game with 24 points and 14 rebounds.

Claresa Banks added 11 points off the bench for the Trojans

The Trojans will be back in action on Saturday when they host Coastal Carolina beginning at 2 p.m.

The Trojans finished Thursday with 23 turnovers, a point of concern for Rigby.

“We watch our turnovers on film. We will talk about it, get them to regroup and make it a priority to take care of the ball on Saturday,” she said.