A day to remember: Gandy signs scholarship with LBW-Andalusia 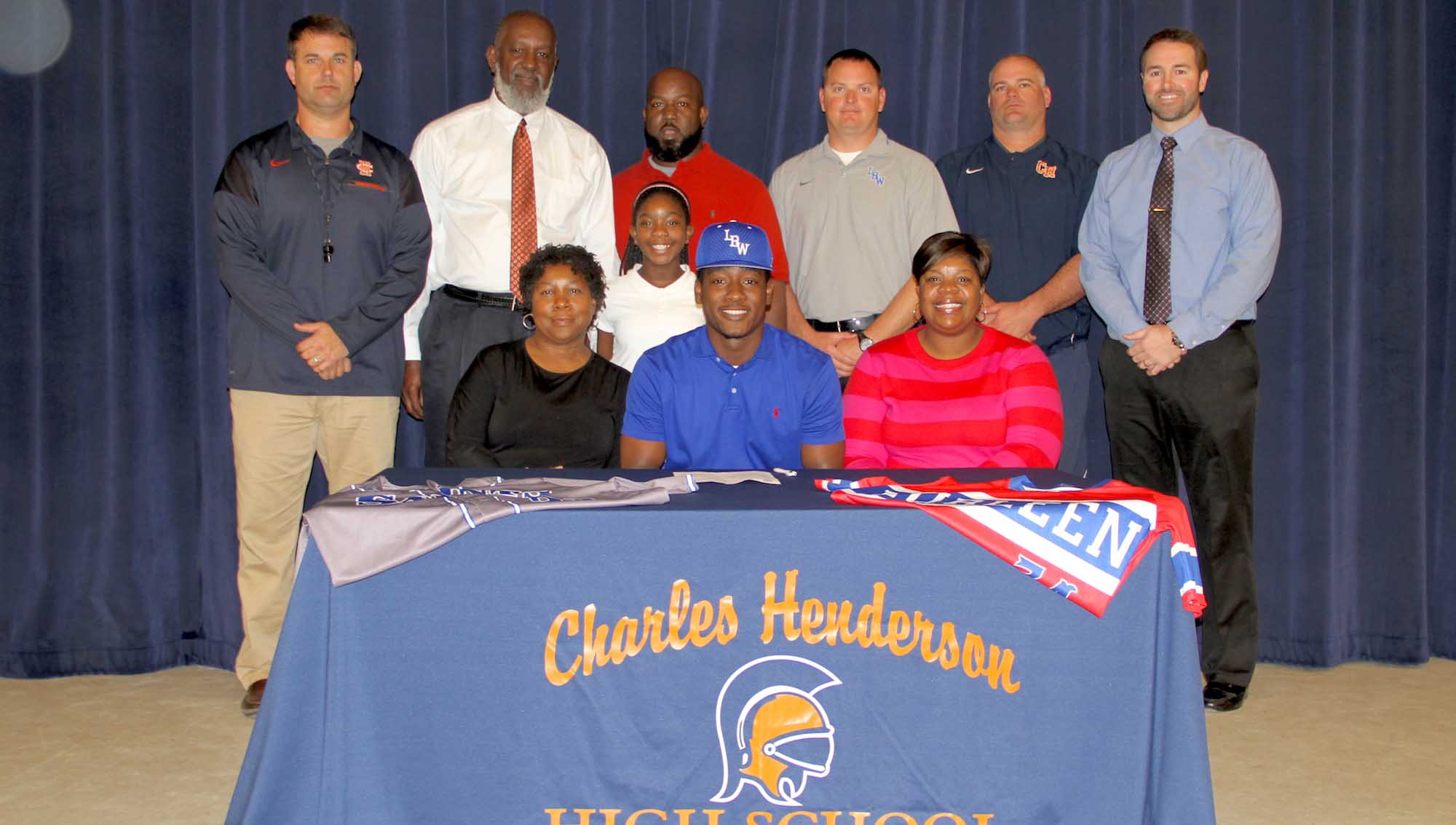 Charles Henderson High basketball coach Shelby Tuck smiled when talking about Bryson Gandy, and said he wished the senior had played for his basketball squad this past season.

Every coach at CHHS wanted Gandy in their lineup, and it was that raw athleticism that caught the eye of the baseball coaches of LBW in Andalusia, and the offering and signing of a scholarship Tuesday morning.

“He’s just very athletic, that’s the main thing,” said LBW assistant coach Brandon Ware. “We needed to replace some outfielders for next year and we certainly think he can do that. We saw him last summer at a showcase workout and we were very impressed with his ability to run, throw and hit for power. He fits what we are looking for in our lineup for next year.”

Gandy, a senior at CHHS, was a standout football player for CHHS head coach Brad McCoy, and is practicing baseball now for head coach Josey Shannon. Gandy chose not to play basketball in his career at CHHS, even though he could have contributed greatly according to other coaches.

Shannon says he is the best athlete he has coached thus far in his young career.

“He is definitely a great kid and a great individual,” said Shannon. “His work ethic is very intense and very focused. He’s the closest athlete I’ve ever coached to being a 5-tool player. I’ve coached some good ballplayers, but he has the ability to be an all-around 5-tool guy, and that just does not happen every day. I’m very impressed with his work ethic and his humbleness. He’s a very humble guy and I like that about him. That is a credit to his mom and dad and the way they raised him.”

For Gandy, he had the opportunities to play college football and college baseball, but it was his love of baseball that sent him to LBW.

“I grew up loving baseball, I love to play the game, and I just thought that LBW would be a great fit for me,” said Gandy. “It really has been special playing ball here (at Charles Henderson). I thank God for blessing me with the talent to play all the sports I have played, and I’ve just got to give all thanks to God and my family.”

This past year Gandy had a big year in football, rushing for 323 yards and two touchdowns, pulling in 28 receptions for two TD’s, throwing one TD pass and returning one kick off for a touchdown as well.

As effective as Gandy was on the field, McCoy said his impact as a positive example was more valuable.

“I’m very proud and appreciative of his parents to allow us to coach him in football,” said Coach McCoy. “He was a distinct pleasure to be around. This past year he had a great season on the practice and game fields. He was always very humble and never complained, and always did what was asked of him, and that’s what kind of athlete we want. Not only am I proud of him, but proud I had the pleasure to be around him three years.”