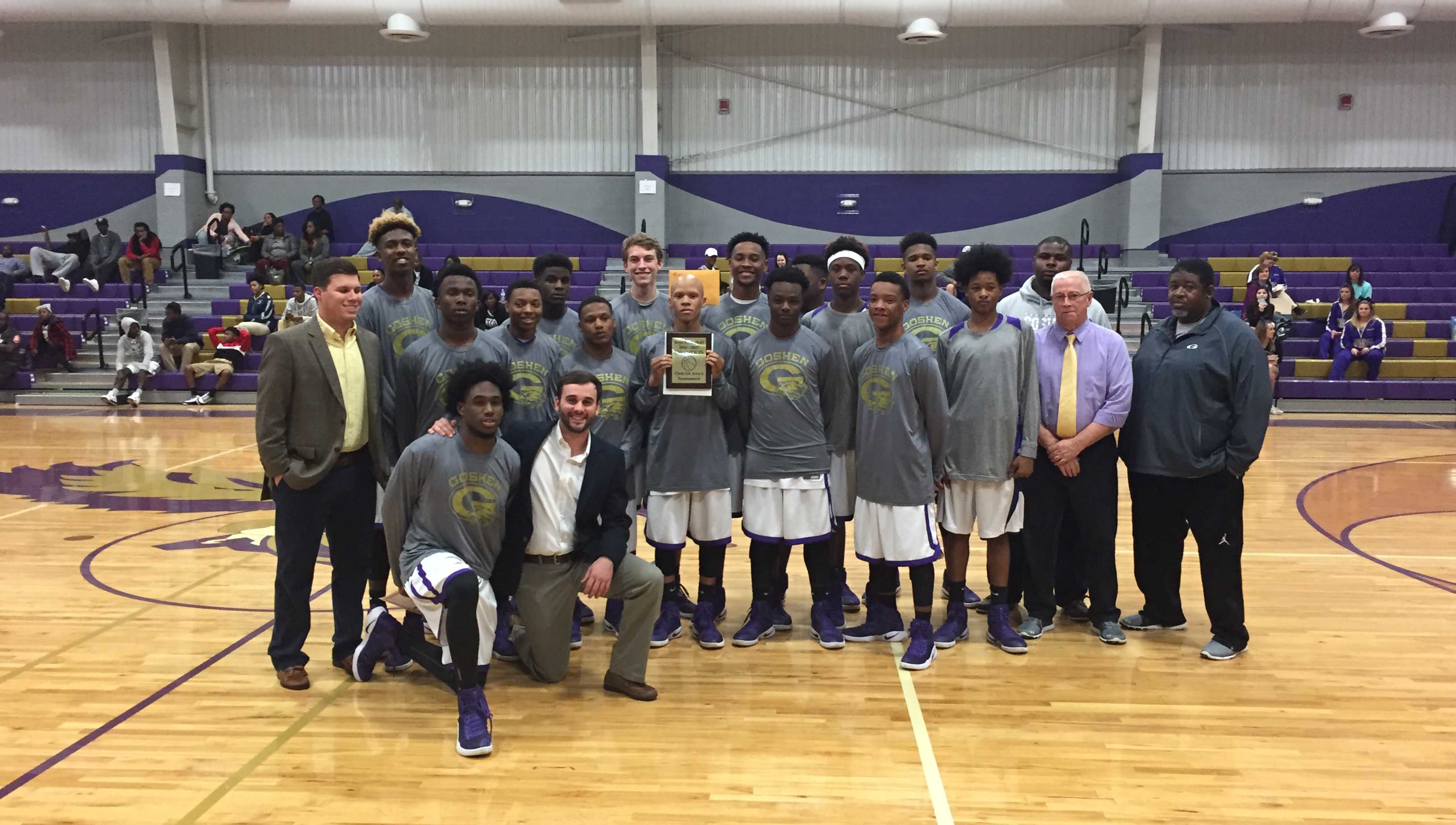 Photo/mike hensley
The Goshen Eagles claimed the Class 2A Area 6 championship with a 54-50 win over the Calhoun Tigers on Thursday night. The Eagles will host the sub-regional tournament beginnin on Tuesday at 6 p.m.

Tavares Adams blocked a Calhoun shot with just under 10 seconds remaining to help secure a 54-50 win and claim the Class 2A Area 6 championship for the Goshen Eagles.

The win secures home court advantage for the Eagles in next week’s sub-regional tournament.

“We are excited,” said Eagles head coach Ethan Carroll. “These guys come out here and lay it on the line everyday. They deserve it. This is one of our milestones and we are going to celebrate tonight. Starting tomorrow we are going to look ahead.”

Both teams rallied back-and-forth all evening long. The biggest lead for either team never got higher than six points.

“Coach Powell at Calhoun has done one of the best jobs that I have ever seen,” Carroll said. “They are a good ball team. We beat them three times this year. It’s hard to beat a team three times.”

The opening quarter was back and forth before the Eagles were able to take a hold of the lead at 16-15 heading into the second quarter. In the second, it was the Tigers’ turn to seize the lead. The Tigers grabbed a 24-21 lead and led by as many as five points before entering the locker room at halftime with a 34-29 lead.

It took nearly three and a half minutes for either team to score in the third quarter. The Eagles broke the scoring drought, and after both teams traded baskets, the Eagles embarked on a 9-0 run to reclaim the lead at 42-38 before entering the final quarter with the Eagles holding a five-point lead at 47-42.

“That was huge,” Carroll said. “Each game we look at what kind of personnel we have. We know Tavares and we going to put him in to protect the rim. With his height, we knew they were going to have a shot higher on the back board that gives us a chance for rebounds.”

Hollis made up for his turnover and sank both free throws to ice the game and the championship.

Caleb Dawson led the way for the Eagles with 14 points, while Michael Hollis also finished in double figures with 12.

The Eagles will host the sub-regional tournament next Tuesday evening beginning at 6 p.m. against the winner of Verbena and Thornton.