Back to work: Trojans return to the diamond for Spring practice 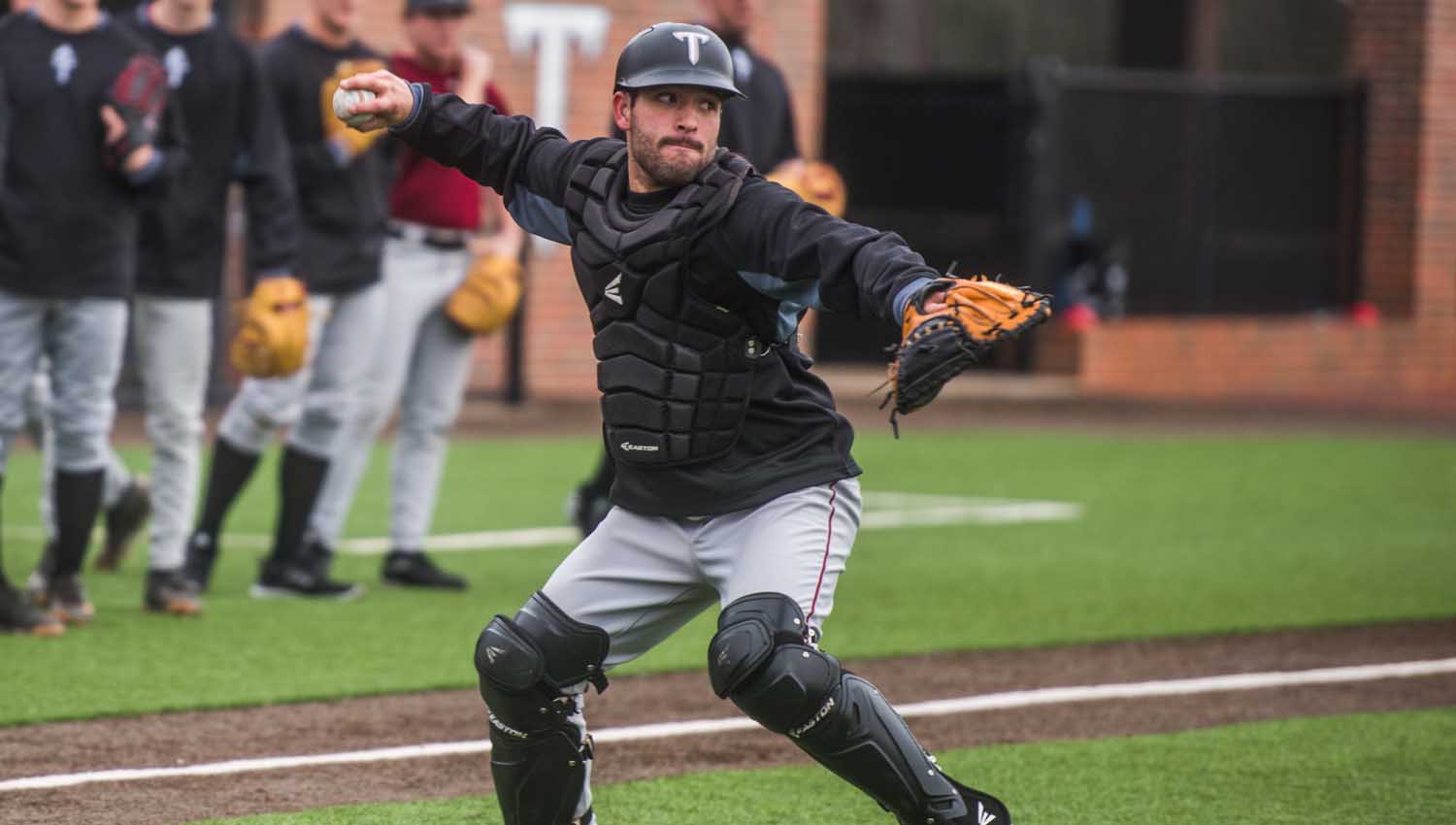 Photo/Jonah enfinger
Chase Smartt throws comes out of the crouch as Troy’s catcher on day one of spring practice on Friday afternoon. The Trojans will open up the 2017 season on February 18 against Xavier.

In three weeks the Troy Trojan baseball team will hit the field to begin the season against Xavier.

On Friday afternoon they began spring practice at Riddle-Pace Field.

The Trojans begin year two of the Mark Smartt era and the excitement level to get started couldn’t be higher.

“Day one is always an exciting day,” said Trojan head coach Mark Smartt. “Everybody that is associated with the program is excited to be here. We will get going and get the first weekend behind us and hopefully be ready to play in three weeks from today.”

The Trojans finished last year with a 32-36 record and were led by perhaps the best one-two punch on the mound in the conference in Grant Bennett and Lucas Brown. This year, the Trojans have been tasked with reshuffling a pitching rotation that will feature junior Corey Childress at the top after spending last year as the closer.

“We are moving him back into the rotation,” Smartt said. “He will go into the number one slot on Friday night, so that will be the biggest change.”

Last year Childress threw 49 innings and had a sub 4.00 ERA at 3.12 along with 10 saves. Childress is comfortable moving back into the rotation after having a brief stint as a freshman before moving into the bullpen. The young flame thrower relishes the opportunity to lead his team on the mound in 2017.

“I feel the pressure to do as the team needs,” Childress said. “I want to go out there and do my job and do what needs to be done for this team.”

Unlike last season, where the pitching staff was looked at to lead the team, this year the Trojans offense looks to carry the torch. Senior outfielder Joey Denison leads the way for the Trojans in 2017.

The Troy native hit .322 last season with seven home runs and 37 RBI’s. Denison had an eventful offseason, including a successful season in the New England Collegiate Baseball League where he finished near the top in the MVP race.

The hope is that he can carry that performance into the season.

“I certainly hope it carries over,” Smartt said. “Denison had a great summer and he was our best player in the fall by far and he is a guy we are looking at to have a good year. He is a senior and a veteran guy that has played a lot of baseball.”

“It gave me some confidence,” Denison said. “Just being able to play with some different guys, it was a good time.

“Baseball is baseball no matter where you are at,” Denison said. “I think the main thing that league did for me was give me some experience.”

Coach Smartt believes along with Denison, the Trojan offense will be an area of strength in 2017.

“Hopefully we will be a good offensive team all the way around,” Smartt said. “We are a faster team this year. We have some guys that can run and I think our overall lineup is going to be better.”

The Trojans will have their hands full with a difficult schedule in 2017, which includes defending national champions Coastal Carolina.

“I think they (Coastal Carolina) put our conference under a different light,” Smartt said. “They are new members. We get for the first time in our Division I history the opportunity to play the defending national champions. I think it heightens the attention towards our league, which is something that I think we deserve.”

The Sun Belt Conference will feature a new format for baseball in 2017, one that will feature two separate divisions. The Trojans, along with Coastal Carolina will make up the Eastern Division.

“We are in there with the defending national champions,” Smartt said. “We look forward to the challenge and the Sun Belt Conference is a good league to be a part of. We have had success in this league and I hope it continues.”

The two winners of each division will be named the top two seeds for the tournament. The tournament will now feature 10 teams rather then the usual eight. First round games will feature the eight seed playing the nine seed and the seventh seed playing the 10th seed in a pair of single elimination games.

The Trojans will take on Xavier in a four-game series to open the year beginning on February 17 at 6 p.m.