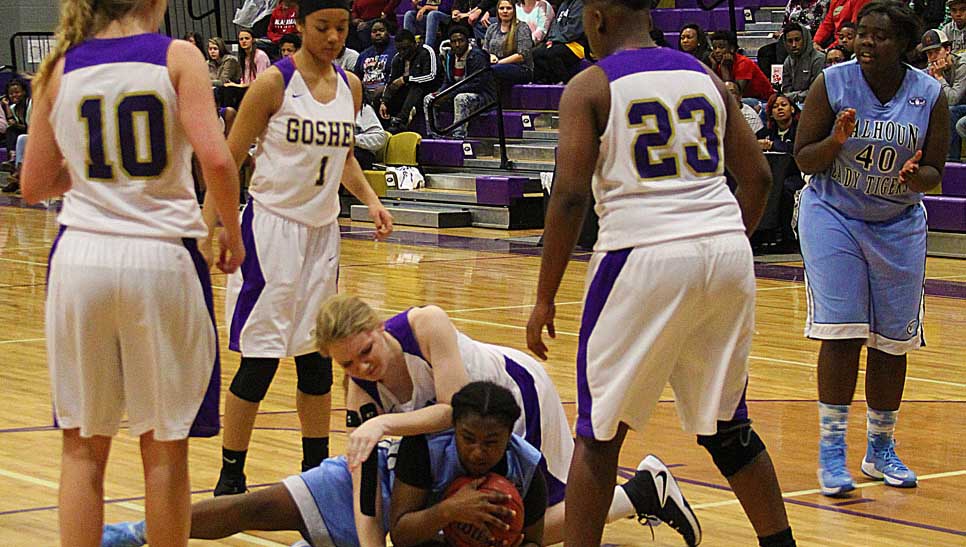 Photo/april brown
The Goshen Eagles boys and girls basketball teams swept Calhoun in a pair of wire-to-wire finishes on Thursday night. the girls began the night with a 48-47 win and the boys capped off the night with a 63-58 win in overtime.

The Goshen boy’s and girl’s basketball teams both won in dramatic fashion over Calhoun on Thursday.

The boy’s capped off the evening with a 63-58 win in overtime to improve their area record on the season to 5-0.

“Overall I thought we did well,” said Eagles head coach Ethan Carroll. “We got bit by the flu bug this week so we had some guys out. The energy level wasn’t where we needed it to be, but I think that is because we have been sick. But no excuses. It’s hard to win these area games without slipping up and I am proud of them for coming back.”

The Eagles and Tigers were dead locked at two a piece with two minutes remaining in the opening quarter before finishing in flurry and with the Tigers holding a 10-7 lead heading into the second.

Michael Hollis and Zack Alford got the offense going, combing to score 12 points in the second quarter and the game entered halftime with the score tied at 24.

“We are going to shoot the ball, and sometimes it’s going to be a little off,” Carroll said. “We knew the law of averages was going to even out and we just had to move the ball.”

The second half didn’t see either team lead by more than seven points and it stayed nip and tuck until the end of regulation.

With a 1:50 remaining in the fourth quarter and the Eagles trailing by three points, Alford converted from behind the arc to even the score.

The Tigers were able to hold the ball for the next 1:47 before turning the ball over on a traveling call with just three seconds remaining. The Eagles’ last ditch effort to win at the buzzer fell short sending the game into overtime.

In overtime Alford continued to lead the Eagles by scoring seven points to help the Eagles pull out the win.

“We have been there before,” Carroll said. “Last year we were in like four or five of them. We felt comfortable with what we do in overtime.”

Alford led the team with 25 points, while Hollis finished with 15.

“If gives me confidence knowing that I have girls that will fight to the end,” said Eagles head coach Fred Lowery. “They have the ability to win a close game.”

The Eagles were able to even the score on a free throw by Bree Griffin with :39 left. Shamiya Griffin put the Eagles on top with :25 and sister Bree Griffin was able to put the final nail in the coffin when she converted two free throws to give the Eagles a four-point lead with 10 seconds left.

The Tigers made a three at the buzzer but it was a little too late.

Bree Griffin led the way with 25 points while Shamiya finished with 13.

The Eagles will be back in action on Monday when they travel to take on Central in the finale of area play. Girls begin the night at 5:30 p.m.