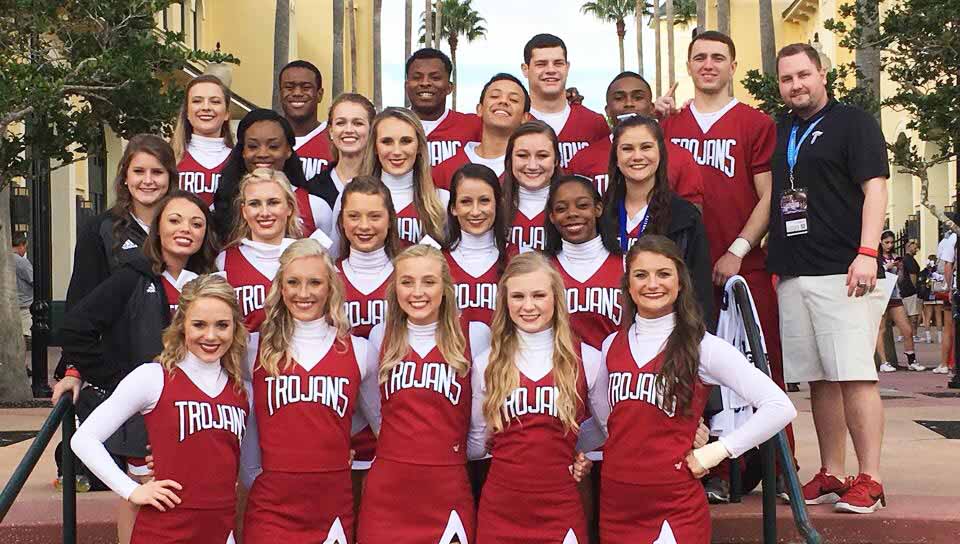 The Trojans finished in fourth place out of 17 squads in the small coed Division I division. The fourth place finish is the best ever for Troy.

The Trojans finished behind just Memphis, Purdue and Bowling Green.

“It was a lot of fun,” said head cheer coach Richard Watkins. “The process leading up to it was the best part of it for me; all the training and practices that we had to go through. I know the kids probably didn’t enjoy it very much, but seeing how much we overcame and how much we came together to put a winning product on the floor is what is important to me.”

While most teams had a about a year to prepare for the championships, Troy came into Orlando under a time crunch. Watkins was named head coach on October 17 and had just a few short months to put together an elaborate routine.

“The routine was one of the harder ones that they have done,” Watkins said. “I have only been with them for three months. We would normally go through a year-long regiment. I had to put a rush order on it for three months.”

Even with the short time to prepare, coach Watkins always believed he had a team that could go down there and be successful.

“It was nothing that they couldn’t handle,” Watkins said. “We went down there knowing we were going to be the smarter team.”

The Trojans arrived in Orlando on Friday afternoon and quickly got to work preparing for the event. They spent Friday evening practicing and they also got a sneak peek of where they would be performing.

“We showed them the arena and where they would be competing,” Watkins said. “We made them get comfortable with their surroundings that way when they competed on Saturday it wasn’t a big shock.”

After the competition on Saturday, the squad’s members were able to hang out with family and enjoy Orlando.

With all the success in this year’s competition, the Trojans feel like they are in prime position to compete for a championship next season with a whole year to prepare.

“I think we can go into next year very confident,” Watkins said. “If we can do what we did in three months, imagine what we can do in a year. If they can overcome everything that happened this year and they can become an even tighter family, I can’t imagine what we could do.”